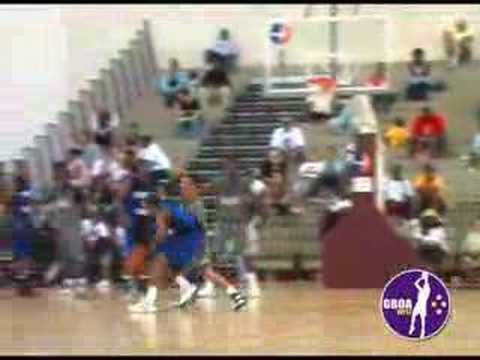 A mix of Darius Morris’ Belmont Shore team from Ballislife.com. Morris was named to the all-tournament team at GBOA. Also be sure to check out BallIsLifes other video (posted earlier) and interview with Darius.

A couple more quotes on Hill and Morris from Pangos. These are from ESPN.

6-4 junior Darius Morris (Los Angeles/ Windward) has all the physical intangibles that colleges covet in a 1, but his tendency to force the issue and eagerness to make the spectacular play are worrisome.

Second on Hill who was also named a top performer.

If there is a more prolific passing 3-man in the country than Hill, I have yet to see him. He is tremendous in the open court and possesses vision beyond his years. In the half-court set, Hill is smooth off the bounce, and he can either hit the floater or dish it off to an open teammate. He’ll probably play the 3 in college, but he does have point guard skills. His one drawback is shooting, but if this weekend was a sign of things to come, he has definitely improved that area of his game. His shot is somewhat of a set shot, but his release is pretty solid. His stock has continued to rise, and by the end of the summer he should end up as one of the top 50 players in the country.