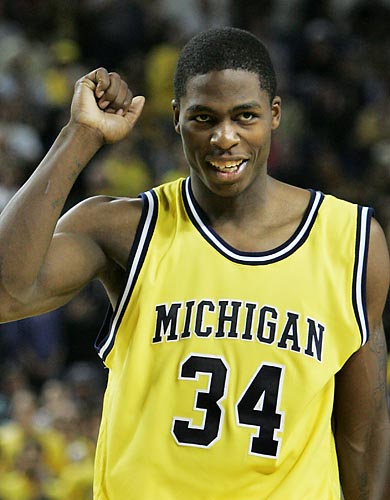 “In Beilein We Trust”

The sign rings true and I’m not quite sure how I will doubt anything John Beilein does again. Since Beilein has arrived all we have heard was that his 1-3-1 wouldn’t work in the Big Ten, he wouldn’t recruit Detroit, we need to offer Justin Watts instead of Zack Novak, and who knows what else. Well tonight two kids from the city of Detroit led Michigan past a Duke team full of All Americans with the help of a 2 star shooting guard from Chesterton, Indiana.

I am now a believer. I wrote in the pregame that on paper there is no way Michigan could win this game, but I must have overlooked TGCICB (Beilein has been mocked by Spartan fans since his arrival as “The Greatest Coach in College Basketball”) in my analysis. He has a plan and it’s starting to unfold before our eyes. I received several emails telling me I was wrong about this being an NIT team and I have to give you guys credit. This team can compete night in and night out with anyone in this conference. There are still plenty of games left to play this year but this is a win to remember.

The thing that stands out for me today is how much mental toughness and poise this team shows. Duke went up 53-50 with 8:36 remaining and this team didn’t fold. Michigan came back with back to back Zack Novak triples (both assists by Kelvin Grady). 1 minute later the score was 56-53 Michigan and they didn’t look back. I can’t even count the number of times in the last 10 years a Michigan team has crumbled under pressure but this team is different. It took a year but John Beilein has instilled confidence in this team and they have forged an identity.

It’s impossible to overlook Manny Harris and DeShawn Sims for sticking with this program. They both have had multiple chances to bail on this program but they both kept with it. They were the difference tonight and deserve all the credit they will get from this game and anything that happens to this team over their careers.

Michigan controlled all four of the “four factors” in this game with a better eFG%, offensive rebounding percentage, turnover percentage, and free throw rate.

I’m sure many people will blame Duke’s cold shooting from three point range for their loss but that was a product of Michigan’s defense. Duke attempted 33 threes, almost double their season average of 18 per game. They settled for jump shots all night long and played right into Michigan’s hands. Michigan rebounded extremely well after a subpar performance in College Park and they were outsized at just about every position.