I don’t know that I’m going to be able to post about recruiting once per week. I’ll stick to just a couple notables for today. 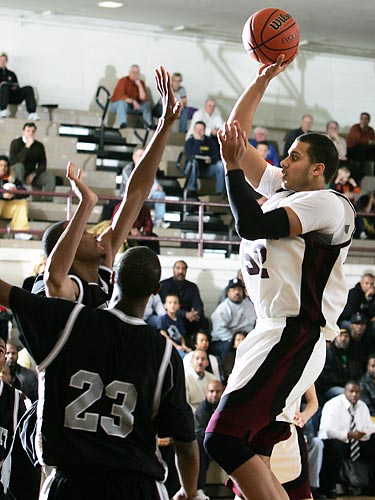 Morgan got off to a bit of a rough start Monday night. U-D Jesuit blew out Detroit Community and Providence bound big man James Still but Morgan was ejected late in the third quarter.

Morgan received his first technical for disputing a call with an official. The second was called for hanging on the rim after a dunk. Morgan finished with eight points and six rebounds.

Not the best start for Jordan but it’s a long season.

The Illinois guard had himself a great night in Lake Forest’s overtime loss to Warren. Vogrich was matched up with Illinois bound guard Brandon Paul. Vogrich scored 18 of Lake Forest’s first 20 points and assisted the other basket. Vogrich finished the night with 39 points and 9 rebounds. Vogrich had a shot to win it at the buzzer in regulation but his shot was long and he didn’t have enough in the tank to pull off the overtime win.

I forgot about Moses in my first recruiting update of the year, it looks like he is off to a solid start. Morgan had 21 points in a win over Coronado including 15 in the second half after being limited by fouls in the first.

Morgan also had 17 points in a win over Silverado on Monday night as well.

Morgan is definitely still a solid Michigan target and seems to be playing well. I’d imagine that John Beilein will try to get him back on campus in the near future.

Freshman Ray Lee helped Robichaud to a win over Ann Arbor Pioneer last night. Lee had 14 points including a late three and a pair of free throws in front of John Beilein himself. Ray Lee was at several football games this year and Beilein is putting in the early leg work.