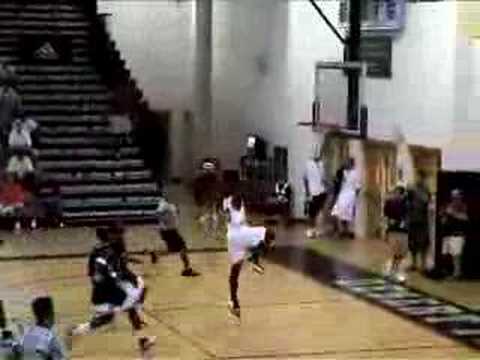 For a guy that hasn’t even played a game in Ann Arbor, Laval Lucas-Perry is getting plenty of buzz. Tim McCormick predicted that Laval will be the best point guard at Michigan since Rumeal Robinson. Dick Vitale has called him one of the top 5 impact transfers in the country. Jeff Goodman calls him the #4 mid season addition (Michigan will face #1 (Legion) and #2 (Stanley Robinson, UConn) on the list). It’s almost impossible to watch a Michigan broadcast without hearing his name. But the questions remain… Who is Laval Lucas-Perry? Where did he come from? How good is he?

Most people who don’t consider themselves basketball recruitniks probably don’t know much about Laval Lucas-Perry other than the fact that he’s been sitting at the end of the bench for a bout a year now and has pretty good taste in suits.

This post will act as a primer for those fans who need to catch up on Laval before his Michigan debut this Saturday.

Laval floated off the radar a bit at Flint Powers Catholic high school, overshadowed by a star studded in-state class that included Manny Harris, Kalin Lucas, Durrell Summers, Dar Tucker, Alex Legion among others. Laval finished his high school career as a 3 star recruit (#138 overall) and rated as the #6 prospect in the state of Michigan.

Laval committed to Arizona over Boston College, Iowa, Michigan, Michigan State, Penn State, and Wisconsin. His recruitment essentially came down to Arizona, Michigan, and Michigan State. Michigan appeared to have as good of a shot as anyone else until Alex Legion recommitted the day before Laval Lucas-Perry’s announcement. When Legion filled the last remaining scholarship in the class of 2007 it was pretty clear that Laval would be looking elsewhere. Michigan State also appeared to be eliminated when their 2007 class already included three guards as well, Kalin Lucas, Durrell Summers, and Chris Allen.

We don’t know if Laval would have gone to Michigan if Legion hadn’t recommitted but looking back it would have been much nicer to have Laval than Alex’s “commitment”. In the end Laval committed to Arizona because of his familiarity with the program (he camped there that summer and received an offer) andÂ  most of all his respect for Lute Olson.

Laval arrived in Tuscon alongside NBA point guard Jerryd Bayless, a phenom who averaged 20 points per game in his only college season. It is often mentioned that Laval was one of the hardest players to guard in Arizona practices, this is saying a lot because there was a lot of talent in Tuscon last year even if the team underachieved as a whole.

Laval played only 5 games in a Wildcat uniform before deciding he intended to transfer. The main reason for the transfer appeared to be the uncertainty of the coaching situation and the fact that Lute Olson didn’t coach the entire year. It’s hard to really take much from Laval’s stats last year considering that he never really got a chance for major playing time. In only 10 minutes per game Laval averaged 4 points, 1.6 boards, and 0.8 assists.

LLP didn’t have a lot of time to make his decision after deciding to leave Arizona because it was critical that he got enrolled in school before the Winter semester. The re-recruitment moved fast and it was clear that Beilein wanted LLP and LLP wanted Michigan. Laval and his family considered a couple trips including one to Wake Forest but decided to end his recruitment and stay close to home at Michigan.

“It wasn’t anything in particular about Arizona,” Lucas-Perry said. “It was just me not feeling comfortable there. I was just trying to find somewhere comfortable, where I can be myself.”

Laval and his family filed an appeal to the NCAA to regain his freshman eligibility (due to the coaching situation at Arizona) after only playing 5 games and it was granted. This makes LLP a redshirt freshman this year rather than a sophomore and means that he loses only a half year of eligibility rather than 1.5 years.

This summer Laval traveled to Taiwan to play with the Athletes in Action team in the Jones Cup. Playing in Taiwan was an opportunity for Laval to get some game action after sitting the second half of the 2008 season. The Athletes in Action/USA team took second in the tournament and Laval’s play was solid throughout. Laval’s averages were aroundÂ  9.8 ppg (high of 22) on 40% (26% 3pt) shooting with 3.3 rebounds, .67 assists, 1.2 steals, and 1.4 turnovers. He didn’t set the world on fire but for playing with a thrown together squad on the other side of the globe in Taiwan it’s not bad.

For plenty of video from the tournament go here (LLP is #7 on the AIA team). So how does Laval fit into this team? I think he gets his minutes at a combination of the 1 and 2 spots. This means he takes some combination of minutes from David Merritt, Kelvin Grady, Stuart Douglass, and Zack Novak.

Because he can play both the 1 and the 2 (which aren’t all that different in Beilein’s system offensively) I think he can play with any of those 4 guys on the court next to him. If he plays with one of the current point guards he’ll play up top in the 1-3-1, if he plays with one of the freshman he’ll run the baseline. I expect to see plenty of tinkering by Beilein over the next few weeks in an attempt to figure out where everyone is most comfortable offensively and defensively.

I don’t think it’ll be a situation where he takes all of Merritt’s minutes or anything like that, especially early on. I would expect Merritt to still get a few minutes every game. I also have seen a lot of people projecting that he will take CJ Lee’s minutes, I don’t see this right now because right now CJ backs up Manny almost exclusively. I don’t think Novak is ready to play the three and I would expect to see CJ still get those 5 minutes or so per game at the three.

Eventually I think Laval can be a double digit scorer and give Michigan that scoring threat at the guard position they are lacking. We have seen what the emergence of DeShawn Sims as a consistent threat down low has done to open up the offense and Laval is just going to open it up even more. He will be one of the only guys on the team comfortable driving in the lane and taking it to the hole but who can also stick the perimeter jumper.

From what I have heard about Laval’s game, it breaks down something like this:

There will undoubtedly be some small issues and adjustments that have to be made by adding a player to the rotation in the middle of the season but I think it will mostly be a non-factor. Laval has been practicing with the team since last winter so it’s not like he just showed up in Ann Arbor.

I think Beilein will work him a long slowly and build his minutes up. I don’t think he will start right away and hopefully games against Oakland, Florida Gulf Coast, and North Carolina Central will act as good warmups. The question of whether he starts is one we can ask on New Years Eve.

While I’m not ready to proclaim him the greatest point guard since Rumeal Robinson, Daniel Horton, and maybe even a point guard at all. I am definitely excited about adding Laval Lucas-Perry to a team that has already exceeded expectations over the first month and a half.

We’ll find out a lot more Saturday afternoon. Get tickets!