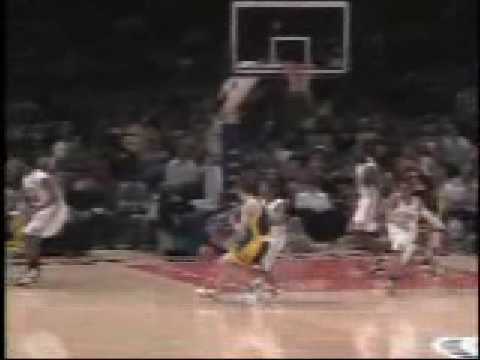 I was taking a look at Michigan’s Ken Pomeroy profile and compared it to West Virginia’s 2004-2005 profile. 2005 was the year West Virginia made the surprising run into the NCAA Tournament and guys like Kevin Pittsnogle and Mike Gansey became household names.Â  Here are the tempo free stats with the NCAA rank in parenthesis. I think looking at these two profiles it becomes pretty clear that we are beginning to see the Beilein blueprint. I didn’t include it but the 2006 team also follows most of the same trends.

Of course there are issues with this analysis, the fact that West Virginia played in a different conference and Michigan has only finished half of their season are just a few. But I think there are still some interesting conclusions we can take from this.

For a little clarity lets try to remember just who exactly the 2005 West Virginia Mountaineers were (video version here). Everyone knows about their tournament run that left them an overtime away from the Final Four but what did they accomplish in the regular season? They started out 10-0 in the non-conference season but their only “quality” win was at LSU, the rest of the pre-conference slate was filled with cupcakes (they did beat NC State and George Washington). After starting 10-0, West Virginia lost six of their next seven including a home loss to 6-22 Marshall and a 38 point loss at Villanova. West Virginia ended up 8-8 in the Big East regular season that year but only had to play UConn (2nd), Syracuse (3rd), and Villanova (4th) once each en route to a 7th place finish.

The magic began when they caught fire in the Big East tournament. West Virginia beat Providence, a Boston College team who swept them on the season, and the same Villanova team that beat them by 38 points earlier that year, before falling to Syracuse in the Big East final. Their tournament performance earned them a 7 seed in the Big Dance and the rest was history.

This West Virginia team certainly wasn’t dominating but they had the unique ability to get hot in a hurry. West Virginia’s effective field goal percentages in NCAA Tournament games were 56.5%, 57.8%, 55.8%, and 74.4%! They also shot over 50% from long range in both of their upset wins in the Big East Tournament. By all accounts, 2005 was a magical year for the Mountaineers but looking at their record if a couple games didn’t go just the right way they might not have even been in the tournament.

Michigan has played 16 games this year and have managed two wins over top 10 teams while (barely) avoiding any embarrassing losses. This Michigan team is playing the same style of ball that Beilein’s team at West Virginia played and they have already proven that they can beat anyone. Looking at the past though I would say fans probably shouldn’t be surprised to see Michigan drop a game or two they should win on paper.

The newest debate on the internet is whether Beilein’s offensive system is a “gimmick” because of it’s reliance on the three point shot. There is no denying that Michigan takes a lot of three point shots but I don’t think it’s a bad thing. Beilein has a philosophy and it has worked for him for 30 years. Taking a lot of three pointers is just another way to try and win games. Everyone has an idea of how to win whether it is Izzo putting football pads on players or Bo Ryan slowing the game down with the swing offense.

Beilein is one win away from 500 career wins and I think he’s pretty confident that his system works. As fans we can find solace in the fact that it appears John Beilein’s system is fully in effect in Ann Arbor. I’m not trying to jump to conclusions and say that because Beilein’s system is “in place” that Michigan will make a run in the NCAA tournament or even that Michigan is guaranteed to make the tournament. But I am ready to say that John Beilein has taken this program by the reins and stamped his name on it faster than anyone would have expected.