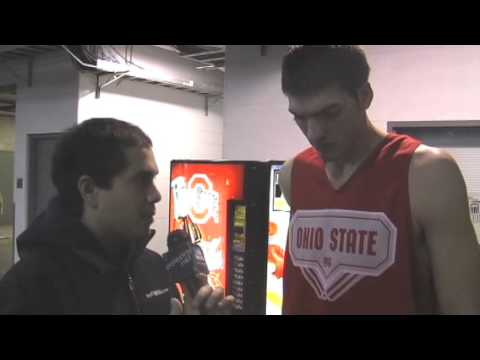 Big games are back in Crisler Arena. Maybe it hasn’t been that long but there was a stretch last year when I didn’t know when the feeling would return. Saturday’s game has just about all of the ingredients for a big time game: its Michigan vs. Ohio State, both teams are battling for tournament bids, the 1989 national championship team will be honored, there is a sense of momentum and energy surrounding the program that hasn’t been felt for years, and did I mention we are playing Ohio State?

Ohio State started the season 9-0 with wins over Notre Dame and Butler but their season hit a skid when David Lighty injured his foot and they suffered a 28 point home loss to West Virginia. Ohio State comes into the Michigan game having lost 3 of their last 6 while sitting at 2-2 in the Big Ten. Their conference wins came over Iowa and Indiana at home while their losses were to Michigan State and Minnesota. Michigan is coming off a disappointing loss to the Illini but they have played some of their best basketball this year after a loss.

Defense has been the core of Ohio State’s team this year and while their D hasn’t played at such a high level after the loss of David Lighty they are still nothing to laugh at. They are one of the best teams in the country at blocking shots (block rate of 19.1%) while also keeping opponents off the free throw line (FTA/FGA = 23.7%). There is still some good news on the defensive side of the ball for Michigan. First, Ohio State doesn’t do a very good job defending the three point shot (opponents shoot 34.2% from long range, 181st nationally).Â  Second, Ohio State struggles against teams that hold on to the ball. West Virginia, Michigan St., and Minnesota all turned the ball over on less than 20% of their possessions and managed to beat the Buckeyes. The only other teams to hold on to the ball at that rate were Notre Dame (lost by 5) and UNC-Asheville (lost by 24).

Ohio State provides quite a challenge for an undersized Michigan team inside. BJ Mullens and Dallas Lauderdale provide size on both ends of the floor. Lauderdale averages a gaudy 2.8 blocks per game to go along with his 6.2 ppg and 4.7 rpg in 22.9 minutes. Mullens on the other hand is a bit more skilled and averages 8.3 ppg in 18.7 minutes. Hopefully DeShawn Sims has done some soul searching because Michigan is going to need his A-game on offense and defense.

Ohio State also starts two very athletic wings that can get it done in a variety of ways: Evan Turner (6-foot-7) and William Buford (6-foot-5). Buford is averaging 18.3 ppg over his last three games and is really starting to get comfortable in his freshman season. Turner has looked like the Big Ten player of the year at times this year and is a bit similar to Manny Harris in the sense that he can shoot, pass, and rebound. John Diebler and Jeremie Simmons round out the starting lineup. Diebler can’t do much more than shoot the three while Simmons runs the point and is probably the weakest link for the Buckeyes.

If I’m Michigan I would try to match up LLP with Buford and put Manny on Turner. That leaves Novak on Diebler and Grady on Simmons at the point. If OSU can get Turner matched up with Novak they are going to have a big advantage because I just don’t think Novak is quick enough to keep Turner out of the lane. Michigan will probably be at a height disadvantage at every spot on the floor but that really isn’t anything new. I also would expect Michigan test Jeremie Simmons with the 1-3-1 zone early and often.

This is the first of 2 games in 11 days between the Buckeyes and Wolverines and both games are a critical for each team’s NCAA tournament chances. Right now it appears to be a pretty safe bet that 6 teams make it from the Big Ten (and 7 might be possible). Both Ohio State and Michigan appear to be positioned right around the 5-7 slots in the conference and if either one of them could sweep the season series they would put themselves in good position come March.

If you have tickets for the game make sure you don’t let the weather keep you away, this team needs your support. Let’s hear thoughts and predictions in the comments.