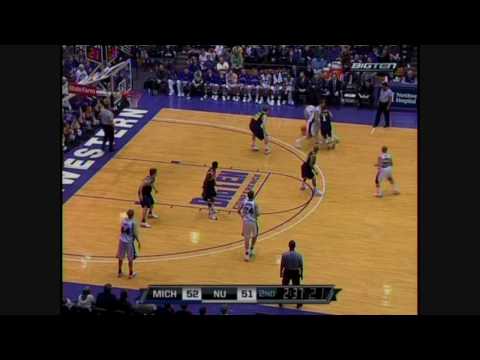 Kelvin is on the bench because he isn’t playing good enough defense. I have mentioned this several times but I wanted to include some video to help demonstrate the point. Stu Douglass did a marvelous job on Craig Moore, one of the best shooters in the Big Ten, on Sunday. He fought over screens and didn’t let Moore get many good looks. When all was said and done Moore ended up 2 for 10 shooting with 6 points, zero assists, and three turnovers.

Here is a quick clip of Stu sticking to Moore, to get the full effect I suggest you go back and watch the entire game because this is what you will see for most of it. In this clip Stu fights over a couple screens and eventually Moore tries to penetrate but is met by Gibson’s help before throwing a wild pass that is intercepted by Harris.

Kelvin Grady on the other hand has struggled on the defensive end and hasn’t really been a factor on the offensive end either. Kelvin has scored in double digits once during the Big Ten season (11 points versus Northwestern) and is averaging 4.8 ppg, 2.2 apg, and 1.6 turnovers per game in conference play (I understand these numbers are knocked down a little bit by the last three conference games in which he didn’t really play. But the point remains and despite the concerns over Douglass’ ball handling, Grady actually has a higher turnover percentage in conference play (25% vs 20%).

Both times that Beilein has inserted Grady into the lineup late in the game to deal with pressure defense, Grady has immediately made a key mental error on the defensive end. I don’t have film of the Penn State game but I do have the clear example from the Northwestern game that almost cost Michigan the game.

Compare this video to Douglass and you can see the issue. Grady is trying to go under the screen which is a big mistake. I know for a fact that this is being repeated time and time again because I saw the reaction when he made the same mistake against Penn State. The whole coaching staff erupted and Grady was yanked.

Defense was a huge problem for this team early on in conference play and now it is the thing that is keeping them in games. It just so happens that the team has started playing dramatically better defense once CJ Lee was inserted into the lineup. If Kelvin Grady was a double digit scorer or a guy who averaged a ton of assists, I could see the argument here. But the fact is that he doesn’t give Michigan enough on offense to make up for his painful mistakes on the defensive end.