AAU season is finally upon us. The Boo Williams tourney tipped off last weekend and there is plenty of AAU ball on tap for this weekend. Here is a basic list of where relevant AAU teams and players will be playing this weekend. AAU teams are still pretty much in flux so some of these “rosters” may be a little off,  if you have a correction or addition shoot me an email at umhoops@gmail.com.

The X-Factor is where Ray McCallum ends up, he could head to the Family with Amir Williams, Michael Talley, and Carlton Brundidge or play with Team Detroit and Trey Zeigler.  I’ll also be keeping a keen eye toward Indiana AAU programs because Beilein has already raided the state once.

Last year I was pretty surprised to find out that you can stream AAU games live online and now the process has become even more ridiculous. You can still stream video from Grass Roots TV but now it appears that it might cost $25 per tournament (although there is an ad on the page that claims streaming video is free). One of the bigger disappointments of the event was the play of 6-5 junior Moses Morgan (Las Vegas/ Palo Verde). He can knock down shots from anywhere, but his ball skills need polishing and he needs to play with more urgency at both ends. 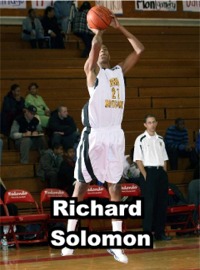 Solomon is a guy that I haven’t talked about that much. The 6-foot-9 California wing started picking up Michigan interest this winter. Here is a February scouting report that breaks down his game pretty well:

Very long body (his torso hints that he might yet reach 6’10” or 6’11”) with ability to the run the floor like a wing, Solomon is athletic around the rim at both ends and has real ability to knock down mid-range jump shots as well as displaying a soft jump hook.  Solomon also has good blood-lines as his father (Richard II) played hoops at Michigan for Johnny Orr while older sister Am’ra just finished her college career playing volleyball at Cal (helping the Golden Bears reach the NCAA Elite 8 last fall).   Solomon’s play as of late is starting to attract high-major attention with the likes of Oregon State and Michigan focusing their attention on this top West Coast 2010 sleeper.  The “sky is the limit” for Solomon who might just be a major surprise by the end of the July recruiting period

ESPN echoes those thoughts in this April 2009 report (Darius Morris’ teammate, Wesley Saunders, also impressed ESPN at the same tournament) Solomon is definitely intriguing. When a prospect “blows up” out west it can mean offers from some big fish like UCLA, USC, Arizona, and whoever else but he has the Michigan ties.

Rivals released their final 2009 individual rankings this week. Darius Morris finishes at #77 (4-star) and Matt Vogrich at #137 (3-star). What’s this mean? Not much in my book. Darius led his team to the state championship and Matt led his to one of their best seasons in recent history while putting up solid numbers. Both of those kids had great years and probably couldn’t have done much more. Morgan and McLimans (who is playing baseball this spring) appear to be wild cards at this point.

The rankings process is flawed in many ways and seeing DaShonte Riley and Donovan Kirk at the bottom of the list shows just how questionable those sophomore rankings can be. Beyond the top 25 or so prospects it gets very hard to accurately differentiate between players. Because scouting companies only have so many scouts, AAU play is naturally emphasized. A huge AAU tournament can land you a spot in the top 50 but tearing up high school competition doesn’t do you much good if Jerry Meyer or another Rivals/Scout scout isn’t in the house.

CJ Lee wrote his own blog on MGoBlue this year and it was a great feature that shared some insight into CJ’s life on the team. However, it wasn’t quite this entertaining. You’ve probably heard of Club Trillion by now but if you haven’t, it’s a blog run by Ohio State walk-on/manager Mark Titus. The name stems from the box score stat line that appears to look like one trillion.

The blog is amusing, even if it is run by a Buckeye, and it recently passed one millions hits which prompted a guest post by Evan Turner. Turner, the target of a lot of Club Trillion hate, makes the case that he is not the whitest player on the team in his rant.