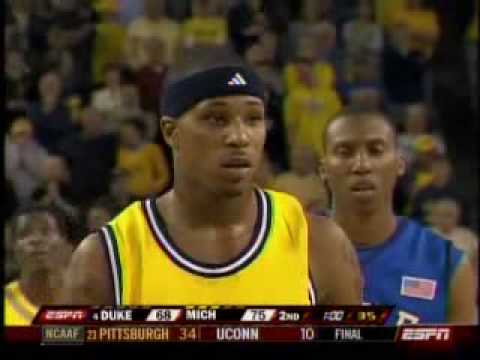 As a casual Pistons fan, it has been painful to watch the franchise spiral from a model of chemistry and hard work to a team that doesn’t even look interested in the playoffs. I was reading a post by Matt Watson over at Detroit Bad Boys that hit the nail on the head in regards to the Pistons. There just isn’t anyone on the Pistons that you would call a leader.

What’s even more frustrating than the lack of on-court production is the apparent lack of fire. For all the talk about how the Celtics would have been a better matchup, Kevin Garnett actually seems to instill more fire and confidence in his teammates than any of Detroit’s starters — and he’s yet to even don a uniform.

The scary part for me is wondering how this will apply to next year’s Michigan team. Dave Merritt’s pre-game speeches have been well documented and CJ Lee’s hustle and grit arguably saved the season. Both Merritt and Lee had been through thick and thin and were mature enough to lead this team. Their styles complemented each other perfectly and their leadership warranted their combined 30 minutes per game.

For those of you that want proof in the difference that CJ Lee made. Michigan’s efficiency margin after CJ Lee’s first start at point guard took a pretty noticeable jump. There was also a noticeable jump in eFG%, both the offensive and defensive numbers improved by over 6%.

Next year there is no pair of fifth year seniors and it is a mystery who will step up and lead this team. Common wisdom would point toward DeShawn Sims or Manny Harris. DeShawn is a senior and the second leading returning scorer on the team. Manny is unquestionably the most complete and best player on the team. But at second glance it’s tough to imagine either Harris or Sims taking on a similar role to Lee or Merritt. After all, Sims admits to having mental lapses and Harris was not without his own issues last year.

Now I’m not saying these two don’t have it in them. Go back and watch the Purdue game again. Manny was vocal and passionate, he pushed Sims and Sims responded. There are other instances of the two players putting the team on their back but that was the best performance from a leadership standpoint that I have seen from Manny. The duo has to take the next step. Harris cannot afford performances like his games at Penn State and Iowa. Likewise Sims needs to avoid drifting and dozing off against teams like Clemson or Ohio State.

Sims and Harris are the assumed candidates but the leader of a team doesn’t always have to come from the top. Looking up the roster for next year, I’m not particularly sold on anyone else. Zack Novak is probably the most competitive kid on the team but he’s also only a sophomore. Zack Gibson will be a redshirt senior next year but his play has been underwhelming over the last two years. Stu Douglass provides a bit of moxie with the ball in his hand but again he is young and not very vocal. Anthony Wright has experience but I think he falls closer to an easy-going guy than a motivator or leader.

I am not trying to say that Michigan is destined to a Piston-esque season next year. In fact, I’m quite confident that this team will improve by leaps and bounds next year. There will definitely be a transition period during the first month or so of the season. The team returns nearly everyone statistically but removing the leadership from a team is akin to pulling the wrong block in Jenga.

The encouraging part to me is that this happens all the time in college basketball. Michigan State will go through the same thing with the loss of Travis Walton and that is just one of many schools that will experience a similar situation. In college basketball more than the professional game, players take on the identity of their coach. These coaches’ ability to create leaders is what separates the pretenders from the contenders and is essentially what differentiated this season from the last decade. I am confident that Beilein understands this because one of the dimensions he stresses the most is team chemistry.