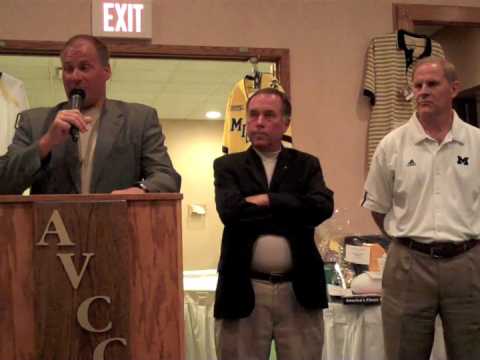 It’s Just Sports posted some more material from a UM Alumni golf outing in Atlas Township. This time it’s video from a Q&A session featuring John Beilein and Rich Rodriguez. The video is entertaining, if for nothing more than hearing Beilein make fun of someone’s obsession with recruiting websites.

Chris Balas posted a great list of Elite Camp notables from Day 1. Trey Zeigler didn’t make it in because he is under the weather but the list is still impressive.

The class of 2010 list is highlighted by Tim Hardaway Jr., a 6-foot-5 guard from Miami who visited back in December and is working to earn his official offer. Other notable 2010 prospects include Devin Oliver, Corey Petros, Walter Pitchford, and Allen Payne.

The 2011 list is impressive as well. In-state guards Patrick Lucas-Perry and Brandan Kearney (both offered) were in attendance. Indiana prospects Spencer Turner and Austin Etherington have played well this spring and also made it in. Matt Poches and Dan Chilcote are two names that we haven’t talked about a lot but they are worth keeping an eye on. Make sure to check out the full list.