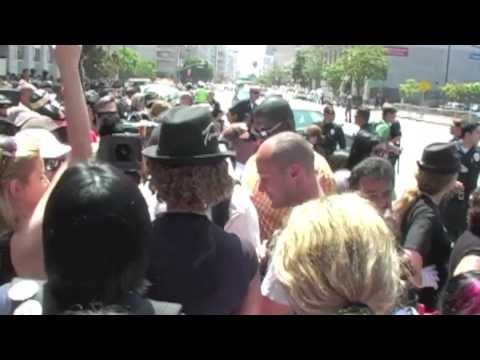 MGoBlue.com continues their series of profiles on the incoming class with a look at Darius Morris. Darius talks about the transition from the west-coast, his relationship with Jordan Morgan and his family, as well as his faith. Darius also reiterates his feelings for Beilein and the Michigan program:

“I knew in my heart that Coach Beilein could turn it around and he did. He told me that he was very confident and that if I committed, I could contribute to the turnaround as well. I just have faith in him and his philosophy in basketball, the way he teaches the game,” Morris said of the third-year coach.

Judging by his quotes, it sounds like he’s adjusting quite well. He doesn’t appear to be having much trouble on the court either. A respected message board poster at TheWolverine, socalgoblue, posted a nice recap of the open gym action that he recently got a chance to view. Darius Morris is apparently playing very well with his new teammates:

Darius Morris was also a guy that really stood out. At this point, for me, the only question I have on Darius is how quickly D-Mo will pick up the offense. Otherwise, D-Mo is definitely a guy that will bring a lot to the table. He is fearless attacking the basket and understands how to find his teammates. His shot is still a bit funky, but its not horrible. But Darius is a high IQ bball player and I think he understands what he needs to do to help this team. Given that his such a smart kid, I think the learning curve should be pretty smooth.

Check out the full post for thoughts on Cronin, Vogrich, DeShawn, Manny, and Stu. The report on Stu are very encouraging, especially because he a guy who might be in for one of the biggest transitions this year.

Most impressive player was Stu…his upper body is really developing. He is not a hulk by any stretch, but his shoulders are broadening and seems much stronger. No one works harder in the open gyms. Stu really looks good coming off of screens and shooting or talking the ball off the bounce. I’m not sure Stu will ever be a guy that will get to the rim regularly, but he definitely has the ability to get in the key and create offense for himself or others. He was uber aggressive off the dribble and looked really comfortable in this role. Very encouraging.

As always, open gym reports should be taken with a grain of salt. But at the very least, they are something to get us through the summer.

Fresh off the news from Jerry Meyer that Prather is planning a September visit to Ann Arbor, the Tennessee native has cut his list to seven schools.

The final seven include: Kentucky, Florida, Memphis, Michigan, North Carolina, Clemson and Vanderbilt. At this point North Carolina and Kentucky have not offered.

The cut to seven is interesting because a recruit can only take 5 official visits. The next step will be figuring out which schools to visit which will likely result in another cut. As long as Michigan gets a visit, I really think they have a shot in this recruitment. A big time offer like North Carolina would definitely hurt but the Michigan staff has put in a lot of hard work into this recruitment. Spencer Turner is arguably the best shooter in the state of Indiana class of 2011. The 6-foot-3 shooting guard was lights out for long stretches this summer and high major programs are taking notice. Michael Johnston from the Louisville Examiner caught up with Turner for an interview.

Turner mentions that IPFW has offered and Wisconsin, Ohio State, Illinois, Michigan, Purdue, and Minnesota have been keeping his phones busy. He adds that he doesn’t have a favorite at the time and is just enjoying the process.

Turner also has kind words for John Beilein, calling his Elite camp one of the best he attended and complimenting his offense:

Video courtesy of Inside The Hall

The 2011 class will be very interesting because there are a very limited number of scholarships to give (Michigan has 3 more to give between the 2010 & 2011 classes). With top ranked recruits like Carlton Brundidge, Brandan Kearney, Patrick Lucas-Perry, Percy Gibson, and Amir Williams giving Michigan very serious looks it puts the staff in a bind with a guy like Turner.

But we know how much John Beilein loves shooters and Turner appears to be the best shooter that Michigan is recruiting in the class of 2011.

I briefly mentioned Dave Merritt’s upcoming apparel company earlier this summer and it appears to be progressing nicely. AnnArbor.com posted an update about Merritt and his plans over the coming months.

The official company announcement is due on August 12th and the launch is scheduled for sometime in September. Make sure you follow Dave on twitter (@davidmerritt15) and check out his latest YouTube short.