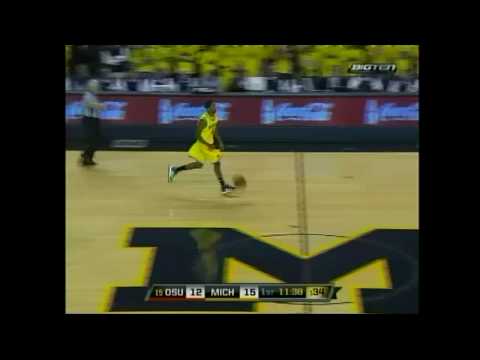 In a year where most expected Michigan to be deeper and more talented than a year ago, it’s becoming painfully apparent that the bench is one of Michigan’s biggest weaknesses.

Michigan’s bench is playing just 25.1% of the team’s minutes which is the 314th lowest percentage in the country with only Iowa and Northwestern having a worse total in the Big Ten. For comparison’s sake, Michigan got 35.6% of their minutes from their bench last year, the third highest percentage in the conference.

There are also some logical reasons that last year’s bench would have scored more points, primarily the fact that DeShawn Sims came off the bench for 9 games, boosting the bench numbers by a few percentage ticks.

Still, looking down the roster it is clear that last year’s bench was better able to contribute.

The plan was to replace Merritt, Lee, Grady, and Shepherd with Morris, Vogrich, Akunne, Morgan, McLimans, and Cronin. Since then, Morgan and McLimans appear headed for a redshirt and Cronin’s career is over.

Now Michigan has 3 and a half players for 2 positions in the backcourt with Vogrich shifting his focus toward becoming Manny Harris’ backup. All the prospective big men have essentially been shelved. Vogrich backing up Harris leaves Wright to backup Novak at the four.

The scary part of this for Michigan fans is that Vogrich and Wright, Michigan’s two options for wing backups, have struggled mightily on the defensive end. At this point, I would expect you would struggle to find a scouting report that didn’t point them out as defensive liabilities.

Matt Vogrich played one of his best games (in limited playing time) as a Wolverine versus Ohio State but he also demonstrated just how much of a defensive liability he can be. These are his first (and only) two defensive possessions in the first half versus Ohio State:

The clips are a bit painful and also a small sample size (Diebler got open plenty in the first half) but there is no denying the fact that Vogrich has struggled on the defensive end. However, Vogrich also showed off the other way to earn playing time: hustle your ass off and make things happen.

In the backcourt, Stu Douglass has been the only Michigan guard to score the ball with any consistency lately. In the first two conference games, Morris and Lucas-Perry have combined for 7 points to Douglass’ 25. Morris appears to be developing but at the same time Lucas-Perry appears that he might be regressing and continues to look extremely tentative.

Michigan can’t manufacture players mid-season so the answers to improving depth have to come from within somewhere. Moving Matt Vogrich to the three full time makes a lot of sense and I think we will see more of that going forward. Anthony Wright appears to be the best option at the four, as painful as it may be, but I wouldn’t be surprised to see Eso Akunne thrown into the mix occasionally.

There has been talk of burning Jordan Morgan’s redshirt but I am not sure how helpful that would be. Morgan is a five man all the way and what Michigan really needs is help on the wings and in the backcourt. Burning Morgan’s redshirt could give Michigan flexibility in moving Sims to the four, however I think it’s becoming clear that Michigan thrives when Sims plays on the block.