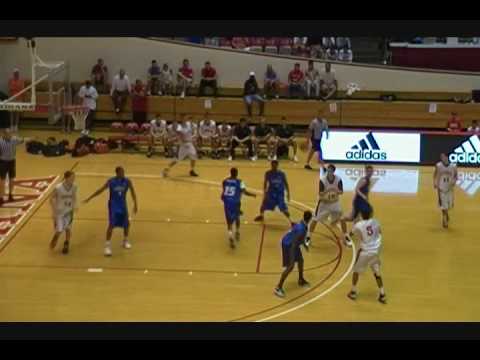 We finally have a more complete recruiting roundup thanks to some new help on the blog (full introduction coming soon). The hotboards still need a complete update and Ben Cronin still needs to be removed from the scholarship breakdown but this should give you recruitniks something to chew on.

Tim continues to perform well, leading Palmetto high school. Hardaway scored 24 points in a game against Seigel in a Tennessee tournament, including four 3-pointers and a four-point play.

Hardaway injured his heel and missed Palmetto’s game versus Ely (16-0) which resulted in an ugly 19-56 loss. There has been speculation that Hardaway’s injury could put him out for the season. However Palmetto knocked off Southridge last night which makes me believe that Hardaway may be playing through the injury.

The New England Recruiting Report updated their 2010 rankings and have Evan Smotrycz in third, citing his combination of size and skill. New Hampton fell to Brewster, 83-70,  after holding a second half lead  but they blew out Vanier Prep, 109-66.

Evan is working on another diary so we should have a full rundown soon.

This guy has really been making a name for himself lately, turning in a 23-point, 11-rebound performance against Holt High School in a tournament in which he was purportedly the best player on the floor, hands-down. Here’s what Jon had to say on the win:

“I felt pretty good about [the tournament], but honestly there were a lot more things I could have done,” Horford told the Lansing State Journal. “I think our guys were just a little overwhelmed to tell you the truth. It’s a huge venue, playing against Holt, probably the favorite in the conference. The guys were a little shaky and it showed. … I feel like if it wasn’t for the first quarter we would have beat Holt by double digits.”

Michigan is getting serious about this Horford and he appears to be returning the interest. Horford has been spotted in Ann Arbor for both the U of Detroit and Ohio State games and appears to be a very serious target at this point. Photo from Next Generation Sports

Zeigler continues to be at the top of many recruiting boards, thanks mostly to performances like the one he turned in against Midland Dow High School on January 5th, notching 20 points.  The All-Stater also took a trip to Michigan State for the Spartan victory over Wisconsin.

Zeigler and Mount Pleasant will take on Alma tonight.

Brundidge is averaging 24 points per game, a slight decrease from last year’s 25.5, but his rebounding and assist numbers have almost doubled according to the Daily Tribune. Southfield is 6-1 overall.

Southfield knocked off Avondale this week, 69-68, and Brundidge scored 21 points and added 5 assists. Brundidge also notched 32 points in the second half in a come back win over Southfield Lathrup after being held scoreless for the first.

The center who, according to the internets, ranges from 6-9 to 6-11, scored 14 points in a 68-43 drubbing of Roseville on January 8th before suffering a sprained knee .

Against Bishop Luers High School, Williams put up 12 points, 14 rebounds and two blocks.  The next game against Madison Memorial, he racked up 15 points, nine rebounds and five blocks.  In summary: killin’ it.

Williams is a long and lean post who runs the floor extremely well. He displayed good hands. Williams is a decent rebounder, but he should be better based on his length and athletic ability. He rebounded better offensively than defensively and had a couple nice put backs. In the post, he went to his jump hook over his left shoulder that, at times, was stiff. He mostly scored on dunks from drop-off passes created by guard penetration. When doubled in the low post, Williams did an excellent job passing out to the open man. Defensively, Williams played with his hands up and did a good job staying between the offensive player and the basket. Williams has off-the-charts-potential and upside, but, at times he does not play with enough energy and urgency, which affects his production. He is a work in progress and, in most cases, young post players like him develops at a slower rate, but he is definitely a high major recruit. How good can he be? Time will tell.

The bad news is that Amir Williams sprained his MCL and will be out four weeks. Before the injury, he also took an official visit to Kentucky.  You can find a transcript of a radio interview here.

The Bloomington South sharpshooter is playing relatively well on a loaded team. Turner is averaging 10.3 points per game but is starting to heat up from three point range, hitting 3 out of 6 versus Lexington. If you need a refresher on the 6’3” guard’s shooting ability, here is a clip from this summer.

Gant has been leading Terre Haute North, also scoring 14 points on 6 of 9 (1-1 3pt) shooting in a 47-19 win over Mooresville. Gant has visited Ann Arbor (Notre Dame game) and remains on the Michigan radar. Here is a recent video clip of the Indiana big man in action.

Michigan remains interested in the consensus #1 player in the class of 2011. Mike Jackson made the trip to see Gilchrist over the break playing in California. Gilchrist remains very interested in Villanova and Kentucky but his interest in Michigan appears sincere considering the fact that he made it in for a visit.

Gilchrist also injured his knee recently, being rushed to the ER, but the results of his MRI were negative and the injury is being called a strain.

Plumlee continues to play well for Arden Christ School in North Carolina but his team is extremely loaded. ESPN got a chance to see him in action this December:

This may not have been Plumlee’s best 3 game span of basketball (Chick-fil-A Classic), but his game is not about posting big numbers (yet!). The big fella is about winning and thrives in an environment emphasizes unselfishness and teamwork. As the ultimate team player that plays with a high level of intensity and focus he is kind of a throwback to how post players used to play. He communicates extremely well, plays excellent positional defense and loves finding an open teammate for an uncontested shot. He impacts the game with his energy and enthusiasm; he consistently makes hustle plays that swing momentum. He is developing a low post offensive game and made a couple of impressive moves after receiving the ball on the block. He is still a work in progress and is improving his overall athleticism, but it does not take a lot to predict the future is bright for the youngest of the Plumlee brothers.

Cody Zeller scored 15 points in a win over Evansville Mater Dei, leading Washington to a 10-0 record. Zeller is still on the radar but also visited Indiana for the Illinois game.

Scout.com’s Evan Daniels caught up with Yogi for a 2012 intro ($) and it appears that while Michigan has not offered, Yogi remains very interested. Ferrell’s coach reports that Purdue and Butler have offered while Michigan appears to be waiting until the summer.

Ferrell is averaging over 30 points per game and most recently scored 32 in a loss at Heritage Christian. According to Inside the Hall, Ferrell attended the Illinois at Indiana basketball game. Dunham had 12 points in a 51-44 win over Anderson but his shining moment came in a 55-54 win over Highland.  Dunham finished with 17 points and 4 assists and hit the three pointer that put Pendleton Heights ahead with 1:27 remaining. Trailing by one, Dunham was fouled on a drive with 16 seconds left before knocking down both free throws for the win..

rivals has a nice video clip of Dunham in action ($) from earlier this year.