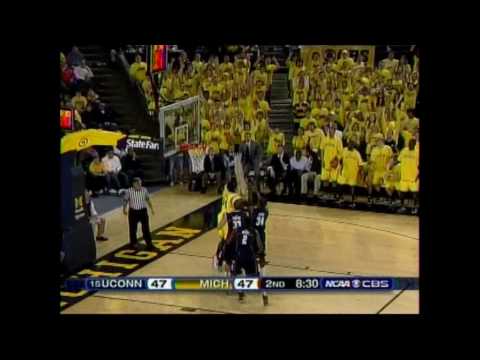 “Every Play Counts” is a feature that I discovered over at Basketball Prospectus designed to examine one player in a single game and attempt to analyze how and why the player succeeds or fails (it also has roots at NFL Fanhouse). Here’s an example where Kevin Pelton examines one of Brandon Jennings’ first games.

After watching Michigan’s game against Connecticut it was obvious that there was one player who needed the “every play counts” treatment: Zack Novak. Some of the most common clichés in basketball are thrown around about Novak, things like “glue guy”, “makes plays that don’t show up in the box score”, “grit and hustle”, etc. The thing is, in Novak’s case they tend to be true.

Note: All links are to videos which will play inline with the page. (I think they should be working now)

Novak began the game matched up with 6-foot-9 240 pound Alex Oriakhi. To compare, Novak is listed at 6-foot-5 210 pounds but there’s no way he is actually 6-foot-5. On the first possession of the game, UConn exploited the mismatch. With Novak attempting to front the post, UConn lobbed the ball inside to Oriakhi who missed a layup after Harris and Sims arrived with help. But UConn stole the outlet pass and Oriakhi followed up Jerome Dyson’s missed layup with an easy tip-dunk over Novak.

Throughout the game Novak guarded a number of UConn big men including Alex Oriakhi, Gavin Edwards, and Ater Majok, all listed over 6-foot-9. Michigan also switched screens quite a bit, leaving Novak to guard Stanley Robinson quite a bit as well. When Novak was switched onto one of UConn’s guards, he looked to switch with a guard as soon as possible to avoid being taken off the dribble.

On the offensive end, Novak is content to work the offense and move the ball. He doesn’t really look to create, especially early on, and it’s very seldom that Michigan attempts to run the offense through him. Novak notched his first basket when he pushed Ater Majok out of the way and wiggled his way to an offensive rebound and putback for Michigan’s first field goal of the game.

When Michigan does look for Novak on offense, they try to get him involved curling off of a screen. Early on, Novak got a decent look off a Sims downscreen that allowed him to pop out for a free throw line jumper but Majok’s length altered Novak’s shot, forcing him to shoot long and hit back iron. Because of his size disadvantage, Novak was forced to front the post versus Connecticut’s taller and stronger power forwards. Novak did a great job of battling on defense and even knocked away a few entry passes.

Novak is also one of the best Michigan players at providing help defense. Here you can see Novak slide over to help Lucas-Perry, who was beat off a screen, and manage to block Beverly’s layup attempt. His court awareness is obvious on both sides of the ball but on defense he just has a nose for loose balls. Novak does a great job of using his lower body to play defense and getting just enough body on the opponent to alter their shot with his arms straight up, he even managed to block a shot without really leaving his feet.

There are other times when Novak is just completely overmatched on the glass. Gavin Edwards pulled down several rebounds right over Novak’s head. Other times Novak attempts to contest close range shots but his lack of size prevents him from affecting the bigger player, resulting in an easy basket (this tends to be especially painful against a guy like Mike Davis who loves the midrange jumpshot). These type of plays are unavoidable and the key for Michigan and Novak is to minimize these types of isolation situations.

One of the ways to minimize the mismatch is the double the ball in the post, something that Michigan did versus UConn. Michigan’s double team was relatively successful, UConn’s bigs didn’t do a great job passing the ball and there were very few times when Michigan was truly burned on the double team.

One issue that Novak has been dealing with is picking up cheap fouls. He has been called for 17 fouls in Big Ten play, 3.4 per game. The Connecticut game was no different as Zack picked up four on the day. The fouls limit playing time (11 first half minutes) and it’s not every day that Anthony Wright will pick up the slack and hit three triples off the bench. Novak’s relative lack of athleticism and aggressive style of play is always going to point toward more fouls but the longer he can stay on the court the better.

One other knock on Novak is that he can be a little overzealous in trying to a draw a charge. In the second half, Novak attempted to take a charge, falling out of the way while his original man picked up the easy offensive rebound for a layup. Finally, Novak’s worst moment of the game was a painful turnover on a lazy pass that led to an easy Jerome Dyson layup.

Novak’s rejection of Donnell Beverley’s alley oop attempt to Alex Oriahki was probably the play of the game. Novak busted his ass for the entire possession and managed to recover and jump just high enough to deflect the pass. His hustle on the ensuing offensive possession might have been even more impressive. Novak managed to sneak between Alex Oriakhi and Kemba Walker, rebounding Laval Lucas-Perry’s missed three pointer and laying the ball up between four UConn players (video above).

As I mentioned in my post-game, this sequence of plays is really the epitome of what Zack Novak brings to this team. Hustle plays are winning plays and despite his lack of size and limited athleticism, Novak has made 2 or 3 times as many hustle plays this year as anyone else on the team.

As mentioned earlier, when Michigan tries to get the ball to Novak they like to give it to him near the circles with the option to shoot or drive coming off of a screen. Novak isn’t a huge threat to take the ball all the way to the hole but he managed to draw a foul on Gavin Edwards the one time that he did try to take the ball to the tin.

It’s all about the little things. For example, on Sims’ basket with 3 minutes remaining, Novak sets a great pick on Gavin Edwards, getting just enough of him to free Peedi for a wide open layup on the opposite block.

Despite making so many positive plays for the first 38 minutes, Novak hadn’t been able to buy a three pointer all game long. He missed his first two attempts and also bobbled quite a few passes that could have led to good looks.

Luckily he picked the most opportune time to hit his first three of the game. With under two minutes to play Manny Harris drove the lane, forcing the defense to collapse, and found Novak wide open at the top of the key. Novak buried the three and Michigan never trailed again.

Novak’s final stat line was 10 points (3 of 6), 4 rebounds, 1 assist, 1 steal, 1 block, and 1 turnover. It doesn’t look outstanding on paper but it’s hard to watch the game and not notice Novak’s impact on the game.