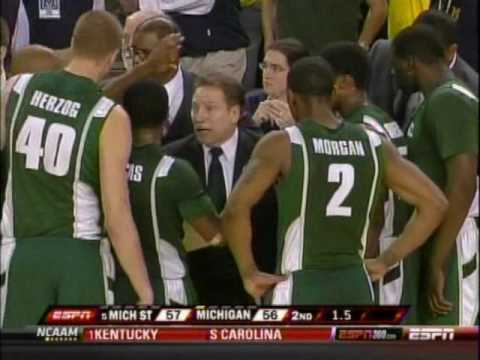 I honestly can’t bring myself to say much of anything right now. In many ways this game was a microcosm of this season. Here’s the final 30 seconds of play, if you enjoy pain:

And if you were curious about Kalin’s elbow in the first half, you can compare this to this. I wasn’t for Harris getting ejected but isn’t there something to be said for consistency? They are almost identical plays.

Finally, give #1 in green some credit, Kalin Lucas is flat out clutch. There was no doubt that he was going to make that final shot.

Post game tomorrow morning. Here’s the screenshot of the foul, or lack thereof, on the final play that’s been floating around.