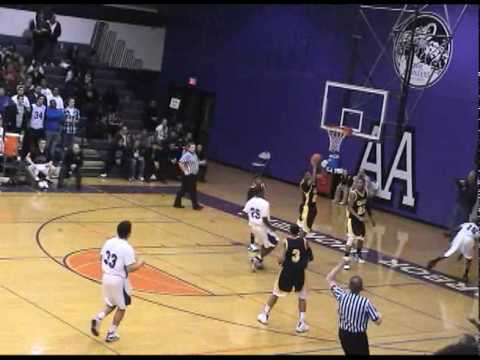 [Ed: Calvin made the trip to see Amir Williams versus Ann Arbor Pioneer and Detroit Southeastern over the weekend and came back with not only a scouting report but film from both games. The 6’10” big man is just returning from injury but he played well in both games. Other recruiting videos live here. ]

When I saw Jon Horford play against Jackson, I saw a kid who was still growing into his body and probably wasn’t even done growing.  He was a smart player, but provided few if any awe-inspiring moments.  Basically, I saw a prospect.

In Amir Williams, we have the opposite.  While both players are 6-9, Williams, despite being a year younger, carries it better. He’s significantly bigger than Horford with wider shoulders and is much more comfortable banging in the paint. He can physically dominate almost anyone guarding him. Basically, Horford is a prospect, while Williams is much more of a finished product. This is also a big reason why Williams is getting more attention from recruiting services and other schools, including Arizona, Michigan State, Wake Forest, Ohio State, and Florida among numerous others. In a recent interview Williams actually listed 28 schools, so it’s clear that he has a ways to go before making a college decision.

You can take this for what it’s worth–would you rather have a player like Horford, whose ceiling nobody really knows, or Williams, who is more what you see is what you get?  One important note: Williams, before his game against Pioneer on Friday, hadn’t played in a game since January 8th due to a sprained knee.  So he was definitely more than a little rusty.  Even so, he managed to put up 15-6-4 in a lopsided victory.

Williams came off the bench and made an immediate impact.  While he only had four blocks, he was usually in pretty good position defensively and altered a lot more.  He did a good job of avoiding fouls, though he could have been more aggressive.

Offensively, like I said above, he seemed rusty.  His touch around the rim wasn’t great, and his drop step at times looked a little slow.  He was able to get himself in good position for rebounds.  Overall though, there just wasn’t much variety to what he was doing.  His hook shot is a little wild.  A lot of that can be chalked up to being a junior.  While he’s more of a finished product than Horford, he still has a lot of work to do on the offensive end.  Think an extremely poor man’s rookie year Dwight Howard.  A plus?  He was knocking down free throws left and right.

The second game I went to, Southeastern at DCD, was a tad more illuminating.  He had a game under his belt after the injury, and he looked a lot more comfortable.  His baby hook was more controlled and reliable and his touch around the basket was more consistent. Williams finished unofficially with 23 points, 7 rebounds, and at least 5 or 6 blocks.

Defensively, he was dominant.  Southeastern attacked him more, which explains some of that, but he protected the basket really well.  He moves pretty well on defense.  He had a great stretch in the third quarter in which he stopped everything and was impossible to stop himself.  When he gets in a zone, there might not be anyone in the state who can get in his way.  I think he’ll be able to extend his stays in that zone as he matures.

There’s a difference between being smart and well-coached.  I would classify Horford as a smart player and Williams as well-coached.  Williams knows where to be on defense, he knows what cuts his teammates will make and he knows how to hit them because he’s done it a million times in practice.  Plus his coach, DCD’s Kurt Keener, has won eight State championships and has coached Chris Webber and Shane Battier.  It seems to me that Horford might have a slightly higher basketball IQ.  The plays he makes, especially the passes, are made simply because he knows the way the game works and he has a knack for it.  I know this is almost impossible to determine with any certainty, but it’s just something I see watching them both.

That being said, whoever lands Williams is going to get a heck of a player.  We still don’t know if he’s done growing.  He can leap, he’s quick and he has pretty good hands.  His offensive game can be molded essentially from scratch. Defensively, he will always be a threat. Basically, he will be an immediate contributor just because of his size and athleticism coupled with the presence he can provide in the post. And that’s awesome.

Also playing for Southeastern was junior Michigan State commit Brandan Kearney.  He got into foul trouble early, which limited him the rest of the game.  He managed to score 10 points in the first half but was pretty ineffective in the second half, when DCD started steamrolling his squad.

It will be interesting to see how Ray McCallum’s absence next year will affect Williams’ game.  My hunch says if anything it will improve his stats because he’ll become the focal point of the offense, but his points will be harder to come by because he won’t have a world-class point guard giving him the ball right where he likes it anymore.