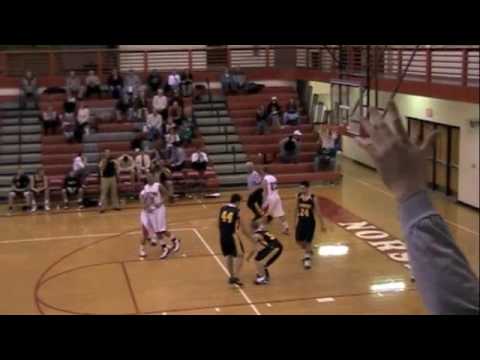 Here’s the latest recruting roundup. This edition includes information on a couple recruits that John Beilein has recently scouted in person, a new 2012 recruit, as well as UMHoops scouting reports from over the weekend on Carlton Brundidge (with video) and Cody Zeller, as well as the typical statistical updates on various Michigan commitments and recruiting targets. Read the whole update after the jump.

Note: This is not intended to be a complete list of all players Michigan is recruiting. Only players with published stats are listed.

The lanky power forward had a strong weekend at the New Hampton Invitational. New Hampton split a pair of games, losing to South Kent before knocking off Winchendon. Against South Kent, Smotrycz posted 13 points and 9 rebounds. His best performance of the weekend was in the second game where he scored 21 points and added 8 rebounds.

FriarBasketball.net was at the tournament and Smotrycz caught their attention.

Evan Smotrycz has all sorts of skills.  A 6’9 kid who is as good as a shooter as you’ll find at the high school level, with the ability to put the ball on the floor? No wonder Keno liked him so much. Mt. Pleasant just keeps on rolling. Their most recent game was a 60-42 win over Flint Southwestern. Zeigler came up one assist short of a triple double with 26 points, 16 rebounds, and nine assists. After a slow star, Mt. Pleasant has won 12 games in a row and appears to be clicking as we get closer to the state tournament.

Zeigler is one of the top four candidates to take down this year’s Mr. Basketball award. The other three are Ray McCallum (Undecided), Maurice Jones (USC), and Keith Appling (MSU). McCallum and Jones will face off this Saturday.

Despite continuing to put up big numbers as the season winds down, Michigan has yet to offer Horford a scholarship. Isaiah Sykes was in Ann Arbor for Michigan’s loss to Penn State over the weekend. Mick McCabe recently profiled Sykes in the Detroit Free Press, calling him the best kept secret in the state of Michigan. The senior had 13 points in a PSL playoff loss to Detroit Cody after picking up two early fouls and missing seven of his first eight free throws. We’ve got a scouting report and video on Carlton Brundidge from Southfield’s win over Clarkston.  Southfield has won 5 games in a row and is in good position to win their conference. Next up is a Thursday game at Oak Park.

John Beilein was checking out Cody Zeller on Friday night and the junior big man responded with a huge performance. Zeller had a career high 34 points in a 63-32 win over Mt. Carmel. Zeller completed his double double with 17 rebounds and he blocked five shots for good measure.

Zeller was in action again on Saturday in a rescheduled contest with Southridge. Commenter Josh Houchin (MaizeNBlue2) made the trip out to see him and put together a great scouting report detailing his 19 point and 12 rebound performance. Video coming soon.

Amir Williams’ past few games have been well-documented on this site. You can watch videos from his games against Pioneer and Southeastern. He went for 15-6-4 against Pioneer even though it looked like he was still pretty rusty from the knee injury that knocked him out for much of the season. Against Southeastern, he finished with 23 points, seven rebounds and at least five or six blocks.

John Beilein was at the Southeastern game, and I still don’t know how I missed him in DCD’s tiny little gym.

But it was his most recent game, a 74-38 beat down over Davison, that was his most impressive. Williams notched a triple double: 20 points, 10 rebounds, 10 blocks.

Terre Haute lost to No. 2 North Central by 18 points but Gant scored 14 ponts and added three blocks. On Friday, Gant notched 21 points in a loss to Carmel on 5 of 13 shooting.

The Hoosier Scoop’s Dustin Dopirak was at the Carmel game and contributed some scouting thoughts on the Terre Haute big man:

Gant’s situation is intriguing. At 6-8, 200 pounds, he’s a skinny power forward at the moment with the lean but muscular body of a really tall cross country runner. However, he certainly has inside outside skills. He scored 21 of the Partiots’ 36 points in the loss. made a nice post-up turn in to score on Hammons and he hits some shots from 15 feet and out.

At this point, Gant only has mid-major offers (Indiana State, Evansville, and Bradley) but he is on the fringe of becoming a high major prospect.

The Wolverine recently posted a recent video ($) clip of Indiana native (North Carolina high schooler) Marshall Plumlee in action. Plumlee had 15 points (5-11) in a blowout win over Greensboro Day. Plumlee plays on a very good team and certainly isn’t required to shoulder all of the scoring load.

Anderson has offers from Utah, Central Michigan and Oakland and has been receiving interest from schools like Michigan, Michigan State, Villanova, and Dayton. Anderson has been putting up monster numbers against Northern Michigan competition, recently scoring 33 points in 20 minutes during a win over Elk Rapids. In his 33 point outburst Anderson hit 4 of 5 threes, but before that he was only 2 of 14 on the season.

Michigan and Anderson strike me as an unlikely marriage but stranger things have happened. Conway is a recent football commit who incidentally might consider walking on to the basketball team.  He’s 6-4 with huge hands, which translates well to both sports.

He plays AAU ball with Carlton Brundidge and, as MGoBlog has reported, is known as an athletic forward who can dunk with authority.

Turner hit six three pointers for 21 points on Friday night in a 19 point win over Harrison.

The 6-4 junior played with a lot of energy on both ends of the floor. Though he’s best known as an outside shooter (he was 3-for-6 from the 3-point line), Turner hit the boards hard (nine rebounds) and got to the free-throw line (6-for-6). He appears to be evolving into more of a complete player than he was last year, when South needed him to knock down 3-pointers. He doesn’t have great quickness, but makes up for it with his basketball savvy. Javontae Hawkins just became eligible for state powerhouse Flint Powers recently but he’s already making a name for himself. The 6-foot-4 combo guard has garnered interest from Michigan State, Michigan, and Wisconsin and has already put together some big games since becoming eligible.

In a 2 point Powers win over Saginaw, Hawkins played great defense on 2011 stud Tommie McCune and added 10 points. Tom Izzo was in the house to watch Powers blow out Davison. Hawkins is known for his dunking ability and his shooting stroke and he provided two electrifying dunks in his Powers debut.

Most importantly, Great Lakes Hoops is reporting that Michigan has offered him a scholarship to the sophomore guard. It’s pretty early for 2012 recruits but Michigan so whether this offer is “official” is yet to be determined. Beilein typically doesn’t offer sophomores this early so it’s more likely that there has been communication that Michigan is very interested. However, Michigan will likely have a decent number of scholarships to offer in the class and it appears Javontae Hawkins is a name to remember at this point. Dunham had 21 points in a 50-41 win over New Castle on February 16th. Dunham recently visited Butler for their game versus Siena.