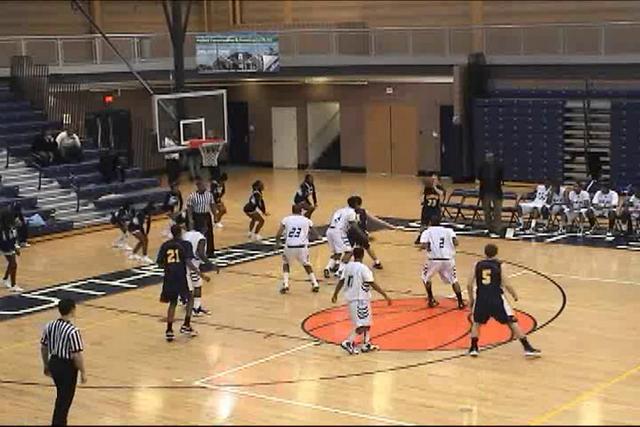 I’m going to come right out and say it: I like the way Carlton Brundidge plays.  He’s big, physical and fearless.  His handle is nice enough to provide the Blue Jays with a one-man press break, which you could tell from the video.  His shot is smooth enough for him to hit not one but two buzzer-beating 3-pointers (one at the end of the first half and one at the end of the third quarter).  He loves banging in the paint and he grabs rebounds like Manny (despite his shorter stature).  There’s a lot to like about his game.

If I had any complaints, I guess I would say he needs to just go up with the ball in the post instead of trying to double-clutch all the time.  That said, he had one particularly nice up-and-under that was good for an and-1 late in the game.

Brundidge had to work for everything he got on Friday night.  He had trouble getting open and when he drove to the basket he was met with a bunch of big bodies crowding up the lane. Apparently, the last time these two teams played, Brundidge went for 20. It was obvious that Clarkston coach Dan Fife was keying his defense toward stopping him especially, making the rest of the team beat him.

Although Clarkston held Brundidge to just three points in the first half, Southfield held a big lead at the half. Brundidge came back in the second and finished with 19 on the game.

His team was struggling late in this game but he wouldn’t let them give it away.  He made plays when his team needed him to and I think he made every free throw he took.  In the end, Southfield came away with their first victory over Clarkston since the early 90s and a leg up in their conference title race.

In this instance, I think Brundidge played better than the film above indicates. In my opinion, this is a guy any team would love to have.

Note: Make sure to check out our scouting report of Indiana junior big man Cody Zeller.