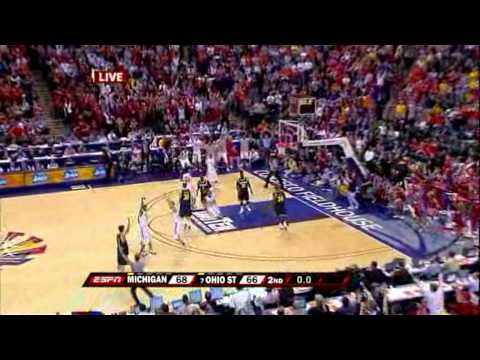 Michigan battled with Ohio State and continuously fought back despite being  behind by double digits for long stretches of the second half but in the end it wasn’t enough. Manny Harris single handily carried Michigan back into the game but it was all for not after Turner’s 40 foot running jumper as time expired.

Turner’s shot was tremendous and there’s a reason that he’s the best college basketball player in the country. Still, it was a running 40 footer from a 28% three point shooter. That’s not a high percentage shot from anyone.

First off, I don’t have a major problem with not defending the inbounder. If you are going to take a running shot like that, the inbounds pass isn’t all that critical. Guarding the inbounder comes into play if they are able to make a very long pass downcourt, Turner caught the ball at free throw line extended. It was a pass that could have been made even with Zack Gibson guarding Lighty.

What you do have to do is impede his progress at some point before half court. This didn’t happen because Buford set a great screen on Douglass. Once Turner is across half court, you simply can’t foul him so actually contesting the shot is tough to do. If you watch the replay, Douglass did have a bit of a hand in his face but not fouling has to be the #1 priority in that situation.

Still, Michigan needed to slow Turner down. I would have put one more player in the backcourt, especially with Buford back there as well, in an attempt to slow Turner down but I also realize that Beilein didn’t want to give up the long pass and a potential good two point look. 2.2 seconds is a time frame where you really have to think about throwing the ball further down the court. 4 or 5 seconds and you are more likely to see the kind of play that Ohio State ran because you can run the length of the court easier.

If Turner misses that shot, are people questioning whether Ohio State should have thrown the ball further down the court in attempt to a get a better look? It’s a thin line. At the end of the day, Turner made a hell of a shot and made it look ridiculously easy but not forcing Turner to work in the backcourt falls on Michigan’s defensive plan.

Back to the other 39 minutes and 57.8 seconds. There were a bunch of “here we go again” moments starting with Michigan’s collapse at the end of the first half which allowed Ohio State to close the half on a 25-6 run. Michigan consistently cut the lead to 5 or 6 points ago but Ohio State typically answered, pushing the lead back to ten. But for one of the first time this year, Michigan managed to play through their mistakes.

Then Manny Harris took over. Harris had 22 of his 26 points in the second half and scored in just about every way possible. He got to the free throw line, he took the ball to the rack, scored in transition, hit three point shots, and even scored in the midrange. Harris had some definitely low points this year but this was one of the high notes.  It was a firm reminder of just what Manny can be if he returns for his senior year. Harris provided no update on his future after the game, saying it would be “wrong and selfish” to discuss his future after the loss which is certainly reasonable.

Looking at the four factors… The game was pretty much a dead heat. Michigan outrebounded the Buckeyes and got to the free throw line more often. Ohio State outshot Michigan by the slimmest of margins (Turner’s last shot was the difference) and also won the turnover battle. Michigan turned the ball over 9 times in the first half but did a much better job in the second.

It was a valiant effort from Michigan but in the end it just wasn’t enough. The adage about “big time players making big time plays” is a cliche but in today’s case it was just the truth. Manny Harris was phenomenal but Evan Turner had the ball last, even if it was only for the last 2.2 seconds.

It’s fitting for this season to end with one more punch in the gut but now it’s time to move toward the future with signing day only a month away. You can bet that the players returning on this roster will be hungry. Any sort of complacency that developed during last off-season won’t be tolerable. In terms of what happens on the blog… We’ll have a series of posts examining what went wrong this year followed by a series of posts hypothesizing how to fix things. We’ll also continue to cover recruiting and everything else that we’ve done before.

Be a fan of Coast to Coast Tickets on Facebook for discounts you can use towards sports tickets and Big Ten tournament tickets!