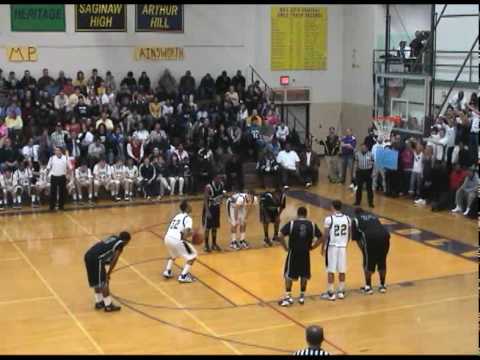 Calvin and I made the trip up to Bay City to check out Mount Pleasant versus Flint Northwestern in the state regional semifinals. The game was an interesting match-up as it pitted Northwestern’s athletic and scrappy team versus Mount Pleasant’s more methodical squad. Northwestern appeared to be more talented as a team but Trey Zeigler was easily the most talented player on the floor.

Zeigler finished with 28 points and 14 rebounds as Mt. Pleasant came away with a 57-49 win.

The 6-foot-5 185 pounds that he is listed at seemed very fair. He was the tallest player on the court and certainly used his size to his advantage. He consistently showed the ability to post up smaller guards. Once he got the ball in the post he was a very capable finisher inside.

Zeigler has a very good handle and consistently used it to get into the lane. He looked for his teammates often as well and made some very nice passes, I had him down for 3 assists but there were a couple others that just weren’t finished. He also had a couple turnovers but they were usually trying to make a pass that wasn’t there.

Zeigler actually played point guard for long stretches of the game and he is most effective when he can get in the lane. Once he gets there, he is capable of taking it all the way to the bucket but he also has a nice midrange game, something that we often reference as missing from this year’s Michigan team. He finished a number of ways in the lane: he used the backboard, went to a floater, and took it all the way.

One of the things that stands out when you watch Zeigler is that he plays very under control. His athleticism allows him to look like he’s almost just gliding by people and he doesn’t look like he is exerting much energy.

No scouting report is complete without the negatives. First off, his jump shot needs a bit of work. It just looks a bit unnatural as he releases the ball a little low and it seems like he almost flings the ball. There isn’t a lot of rotation on his jumpshot and it tends to be a little too flat. He wasn’t hitting the jumper but he didn’t really need to take many jumpers with his ability to get in the lane.

Most importantly, he needs to practice his free throws. Trey finished 2-for-13 at the line. It became so bad that Northwestern implemented a “Hack-a-Trey” strategy late in the game and it almost allowed them to come back. Free throws are obviously a huge mental issue but he also has unique free throw form. He doesn’t take any dribbles before he shoots (he just tosses the ball up to himself) and this creates a stop-start motion that seems a little too quick to be consistent.

Overall there’s a lot to like about Zeigler’s game. He is a versatile player that has the ability to stuff the stat sheet. With his size and athleticism he is a very good rebounder but he can also score the ball in a number of ways. It wasn’t his best day shooting the ball but it isn’t fair to judge his shooting ability on just one performance. Zeigler’s ability to do a little bit of everything is the the real takeaway when you watch him play.

Next up for Mount Pleasant is a rematch with Arthur Hill (Weds., 7PM), a team that blew out the Oilers earlier this year. It will also be a battle of Mr. Basketball candidates as Zeigler takes on USC bound Maurice “Pookie” Jones. I’ve seen Zeigler, Jones, Appling, and McCallum play this year and if I had a vote for Mr. Basketball it would have to go to McCallum.