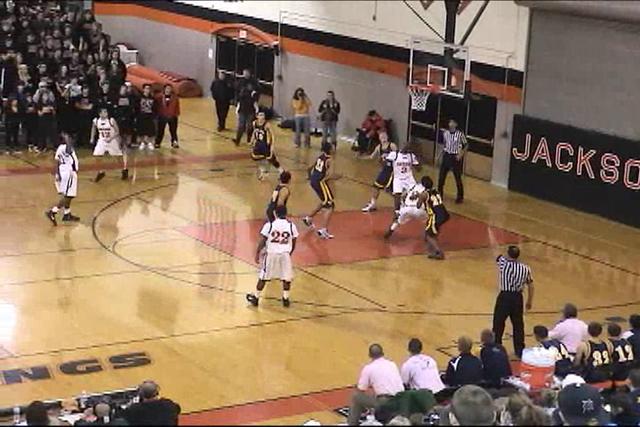 According to The Wolverine, Grand Ledge senior big man Jon Horford verbally committed to the University of Michigan this afternoon. Horford was essentially offered two weeks ago and it was widely assumed that he would sign with Michigan. The only hold up was taking his visit to Ann Arbor to receive his official offer along with his academic presentation.

Horford brings some much needed height to a Michigan roster that was constantly outrebounded and overpowered in the post and graduated it’s only two post players that played significant minutes.

Horford is listed at 6-foot-9 and his weight is listed most recently at 225 pounds. I think that’s more accurate than the previously listed 185 pounds but his true weight probably falls somewhere in the middle, he certainly needs to add muscle to his frame. Horford averaged 21 points and 13 rebounds per game during his senior season despite facing double and triple teams nearly every night. Horford even notched a few triple doubles (pts/rebs/blks) this year.

I’ve had the opportunity to see Horford in person and also on film. Here’s what I had to say the first time I saw him play:

There is plenty to like about Horford’s game. He moves well for a big man and looks very comfortable in the post. Despite being double teamed he had a couple nice spin moves when he got the ball cleanly on the box. He also showed very nice touch finishing around the hoop. He also did a very good job passing out of double teams and finding open shooters (even if they weren’t making shots). Judging by his track record and comments, it’s clear that Beilein is fond of players that can pass the ball at every position on the court.

Calvin, who’s been out to see several Michigan recruiting targets this year, also had the chance to see Horford play and shared his thoughts, which you can read here. He also recorded some video:

For a national perspective, here’s what ESPN had to say when they saw Horford play in February:

Jon is a multi dimensional power forward. He can operate in the paint or score from the high post. That is probably one of his best attributes, his versatility. Inside Jon is solid on the block. He has decent post moves and is a good rebounder inside due to his solid basketball IQ. He understands blocking out and using his body inside. He scores mostly off garbage inside (dump offs and put backs) he is best facing the basket. He can shoot with range out to 16 or 17 feet. He is a solid defender inside though not an avid shot blocker. He is not quite the athlete that his brother was at the same stage. He will be a very solid player at the collegiate level.

Horford’s top three college choices were Providence, Michigan, and Cal. Providence had offered and he likely would have earned a Cal offer had he visited. Horford is the younger brother of onetime Michigan commit, former Florida Gator, and current Atlanta Hawk, Al Horford. He’s also the son of former NBA player Tito Horford, so he certainly has the bloodlines. He doesn’t appear to be quite as athletic or strong at this point as his brother but his brother was widely regarded as a late bloomer.

Many scouting services have Horford projected as a power forward at the college level but he is almost assuredly a five-man in Beilein’s offense. Beilein’s five man does plenty of facing up but also plays with his back to the basket. Horford’s ability to do a little bit of both makes him the perfect fit for the five while he doesn’t have the level of skill that someone like Evan Smotrycz has to play the four, which is more of a wing position.

It’s hard to imagine Horford contributing immediately during his freshman season. He’s still too skinny and needs to get much stronger. On the other hand, nobody over 6-foot-5 on next year’s roster has played a single minute of Division 1 basketball.

It should be an open competition in the post. Jordan Morgan has had injury problems (2 surgeries in under a year, knee/shoulder) but provides a bigger frame (240 pounds). Blake McLimans is every bit as skinny as Horford but he can shoot the three, is a little bit taller, and has a year of practice time.

Horford joins Evan Smotrycz and Tim Hardaway Jr. as the third commitment in Michigan’s 2010 class (updated scholarship breakdown). Michigan still has the capability to take two more players in the class of 2010 however doing so would handicap their flexibility in the class of 2011.

Isaiah Sykes (recent scouting & video) is the other remaining 2010 prospect on Michigan’s radar. Sykes doesn’t have any scholarship offers at this time but has raised eyebrows with his stellar play down the stretch. Sykes calls Michigan “home” but is getting calls from USC and LSU.