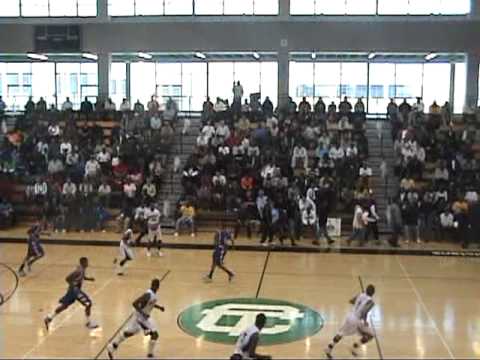 Florida wing guard Rod Days has narrowed his list of college choices to five schools: Georgia Tech, Richmond, Maryland, Michigan and Wake Forest. Days, a 6-foot-6 2011 prospect, is rated a four star (#58) by Scout.com and a three star (#115) by Rivals.

Days plays high school ball in Florida at Sagemont High along with 2010 super recruit, Syracuse commitment, Fab Melo.  Here are two brief clips of Days from YouTube but they serve more as evidence that he exists rather than evaluation tools.

There are plenty of connections at work in Days’ recruitment. He has a pair of cousins that play Georgia Tech football and his coach is a Maryland alum. It’s also worth noting that Wake Forest just fired head coach Dino Gaudio. This is certainly one recruitment to watch as AAU season kicks off this weekend. After Plumlee’s Christ School team lost in the Rise Invitational (video), Plumlee hopped on a plane and headed straight to Germany to play with team USA in the Albert Schweitzer Tournament.

Team USA went 2-1 in the three qualifying games and advanced to the qualification round. Plumlee barely played in the first game after joining up with the team late (7 mins, 3 pts) but he played around 27 minutes in the next two contests. In the second game Plumlee only scored 3 points (1-5 shooting) but he also pulled down a team high 9 rebounds. In a medal round clinching win over Argentina, Plumlee had 4 points (2-8 shooting) but again hauled in a game high 9 rebounds.

In the first round of qualification round action, Team USA beat Spain 91-81 (box). Plumlee had 5 points (0-1 fg, 5-6 ft) to go along with 10 rebounds and 4 blocked shots. It’s clear that Plumlee isn’t a game changer on the offensive end at this point but he looks to be very capable of influencing the game on the glass and on the defensive end with his size.

Best of the Best Scouting Reports Best of the Best Scouting posted a number of scouting reports from the MHSAA semifinals and finals at the Breslin. As I wrote after the semis, it was not the finest hour for 2011 commitment Carlton Brundidge or even 2010 target Isaiah Sykes.

Here’s what BOTB had to say on Brundidge and Sykes:

Carlton Brundidge, 6’0, SG, Southfield, JR : Brundidge is a very good high school basketball player, that can’t be argued. He’s already committed to Michigan, but I don’t know if he’ll be successful in that system. In order to succeed at the highest level, picking the right system will be a absolute necessity for him. At the end of the day, he’s a SG, and that’s the bottom line. He produces and gets the job done, at that’s what every team needs. He’s a very good finisher for his size at the high school level and he can score in bunches when he gets rolling. All in all, his upside is limited in my opinion.

Isaiah Sykes, 6’6, Wing, Detroit Denby : Leading the Denby squad to the semis was no easy task, and big props should be given to him for his accomplishments. He doesn’t have a jump shot to save his life, but you’d be hard pressed to find a better finisher and slasher in the 2010 class statewide. Also drop dimes like a 5’9 PG. Terrific rebounder, and is great at getting the defensive board and starting the fast break and making something positive happen with the basketball. High majors are recruiting him, and it’s warranted, would be a good late pick up for any up-tempo college team.

Read the full article for the scoop on a couple underclassmen and also Michigan 2011 big man target Amir Williams. I agree with Dawkins that Ray McCallum is hands down the best player in the state. If he goes to Detroit, as has been rumored, they will be a force to be reckoned with in the Horizon League.

Speaking of Isaiah Sykes, here’s the first quarter clip from the Denby/Pershing game, which was arguably Denby’s best performance of the season.

The Portsmouth Invitational tips off this evening. Michigan’s DeShawn Sims will be taking part in the event (rosters) and it’s a chance for him to move up on some NBA draft boards. Sims’ first game will be tonight at 9pm (bracket)

The Portsmouth is typically for fringe draft picks who are trying to play their way into the league however it is a chance to play in front of people that matter. If SIms can impress the right people it could yield huge benefits for his future.

In the most shocking news of the day: Evan Turner is headed to the NBA. The other interesting early departure is Xavier’s Jordan Crawford. Crawford played on The Family in the class of 2007 along with Manny Harris, Durre
ll Summers, and Kalin Lucas. Recent ESPN Insider speculation hints that Summers may be the next one to declare.