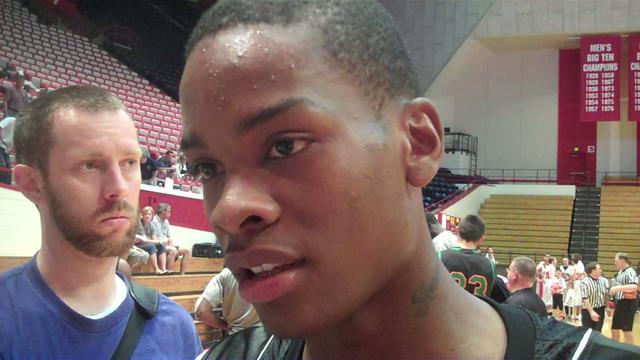 It was a busy weekend on the AAU circuit with major tournaments in Houston and Bloomington. We didn’t make it out on the road but here’s our best attempt to wrap up the weekend in recruiting. Possibly the most interesting nugget is that a European prospect has appeared on Michigan’s recruiting radar. (Everything after the jump.)

Rumors have swirled for weeks that John Beilein was looking around in Europe for prospects. Go Blue Wolverine first reported that Michigan did, in fact, host a European prospect last week. The prospect was Jonathan Gilling (pictured above), a 6-foot-7 wing forward from Denmark in the class of 2011. Here’s a translated blurb from danskbasket.dk:

He is without doubt one of the biggest young talents, I know, and he is in force of his good head, physical / size, technique and high basketball IQ.

He is a very versatile player that has a great eye for the game and find his teammates, but he also has the scoring mentality and is a fantastic shooter. He is also able to lift his game to a higher level when required, which in my eyes tell a lot about a talent. He was, for example. a very important factor in ungseniorholdets (?) cup final victory.

Commenters have pointed out that Gilling appears to be an all-around player who scores the ball relatively well but also has very respectable assist and rebound numbers. I have limited knowledge of Euro-hoops so I don’t really know how to judge Gilling’s production.

This summer has made one thing clear: there aren’t many players on the AAU circuit that can guard Carlton Brundidge. We posted video of Carlton scoring 44 points in a game at King James but he upped the ante at Nike’s EYBL event in Houston this weekend. Carlton went for 53 in an overtime win. Rivals.com reported that Brundidge went 17 of 26 from the field and 18 of 21 from the stripe in the 113-112 win over Seattle Rotary.

Carlton might not be a prototypical 6-foot-6 jump out of the gym wing but he can score the ball in bunches.

Amir Williams was also in action in Houston but he didn’t draw such rave reviews from Scout’s Dave Telep ($). It’s hard for big men to get going in AAU play, especially in The Family’s guard happy offense, There were a host of Michigan targets in Bloomington for the adidas May Classic this weekend.

Indiana Elite was missing IU commitment Austin Etherington. As has become par for the course, Yogi Ferrell got a number of positive mentions ($) from the national sites. The IndyStar caught up with Ferrell for a Q&A.

Marshall Plumlee wasn’t there for the entire weekend but here are some tweets from people who saw him play:

peegs: Plumlee has played hard but not often finished inside
Brian Snow: Marshall Plumlee just knocked a kid down on a rebound and apologized for it…

The Hoosier Scoop reports that Plumlee doesn’t have any visits lined up and is just “laying low”. Plumlee also wasn’t hearing from Indiana for a while but recently caught up with Tom Crean.

Aaron Thomas is a guy that we haven’t mentioned much but he continues to mention Michigan and play well. Here’s Rivals’ report on the 2011 wing guard:

There’s some room for Thomas to make a move and he might be playing his way into four star status. A long and wiry wing who can let it fly from deep, what stood out on Saturday was his exceptional body control. He can take a hit, adjust and finish around the rim and handles well enough to set up his own shot.

Inside the Hall caught up with Thomas, who plans to make a decision in July, for a video interview:

We’ve already told you that Gary Harris can really play but the wing guard went out with a bang in Bloomington. He had 36 points in the D3 Heat’s loss to SYF, Rivals reports:

While SYF came away with the win over D3 Heat, Gary Harris poured in 36 points, and asserted himself as one of the best players in the 2012 class. The 6-foot-4 Harris had his outside jumper working, finished with explosive athleticism, and was simply too big and too athletic for anyone on the SYF roster. It was a big finish to a breakout weekend for Harris.

The Indiana Star has more on Gary Harris in a feature story.

Dorian’s Pride 16U team went 3-1 on the weekend before being knocked out by the Michigan Mustangs’ 16U team. Team Pride was playing without Ray Lee and Matt Costello but Flint wing Anton Wilson played very well. Denzel Valentine carried the Mustangs to semi-finals of the 16U gold bracket.

Rivals reports that 2013 wing forward Basil Smotherman has Xavier and Purdue offers to go along with interest from Michigan State, Indiana, Michigan, and Notre Dame.

Other notes: GoBlueWolverine has a report from The Detroit Spring Showcase ($). Javontae Hawkins, Jordan Hare, and a couple other local kids played in the tournament hosted by Team Detroit. 2011 point guard Chasson Randle has a Michigan offer ($).