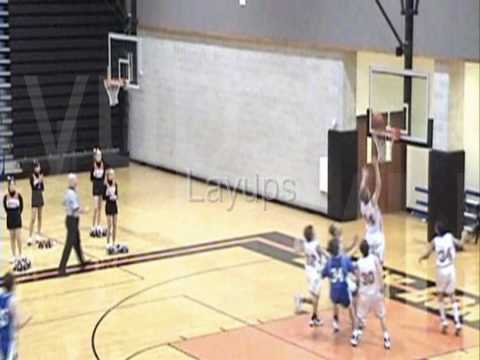 I recently got a chance to chat with 2012 guard prospect Jordan Poydras.  Poydras is originally from Georgia but recently moved to Wisconsin.  He has been on Michigan’s radar for a while and was at Elite Camp earlier in the summer and had a good showing (somehow I missed him). Poydras isn’t at the top of the list but he was at Elite Camp and it’s clear that Michigan is casting a wide net. Here’s what he had to say.

Describe your game. I guess I’m a point guard or a combo guard.  I’m 6-2.  Deep range, I can shoot from about 25 feet.  I can get to the basket but I prefer to shoot.  I have a pretty quick first step.  Usually when people are writing on me they call me a shooting guard that can dribble the ball really well.

Which schools have been in contact with you? University of Miami Florida, Georgia Tech, Clemson, Wisconsin, Michigan and Baylor.

Any offers? Nope, just lots of letters.  And out of all of them, Wisconsin’s recruiting me the hardest.

Do you have a top 5? Michigan, Clemson, Miami, Wisconsin and Baylor.

How did Michigan’s Elite Camp go? Actually that first game we played–you know, Michigan was already interested in me when I was in 8th grade, I was going to camp all the years and last year they invited me for the elite camp.  The first game, I guess I wasn’t one of the big names on their list, but I was playing with Markus Crider and I did very well and I spoke with coach Bacari, and that’s when he told me they were very interested so that first game I did well.  And then when we played Denzel Valentine’s team, against him I did well again and that’s when they told me they were going to come and see me play a lot this summer.  So at the Elite Camp I did very well.

Have you attended any other camps? Well, I already attended Wisconsin and Georgia Tech. Florida said they would let me know if they were going to have theirs, but I don’t think they’re going to do it but if they have it I will be going to theirs.

Do you have any sort of timeframe for when you would want to commit? I’ve always told my friends and my parents that whoever is the first school that commits to me, I’ll commit to them.  You know, if they were a school I’d like to attend.  Like if Michigan offered me today, I’d commit to Michigan today, because that’s where I want to go.  Or, you know, Wisconsin–I like the school and I just moved up here to Wisconsin and it’s ok, but if they offered me I don’t know.  But if Michigan offered me or Miami or Georgia Tech offered me today, that’s where I’d go.

Do you like it up here?  Or would you rather be in Georgia? I’d rather be in Georgia…I mean, I was thinking it was probably a good thing for basketball because there’s decent players and there’s a couple good ones, but in Georgia in terms of getting better every day, it’s stiffer competition.  But they work harder on D up here, which is why it’s probably going to work out for the better because my friends always compare me to Jamal Crawford because I play a lot of offense, I can dribble and I can shoot, but I don’t play D really.  But now it’s changed and I have to play D.

Have you met John Beilein? Beilein is the one who invited me to the Elite Camp when I was a freshman.  And I like coach Jordan and coach Bacari, they seem nice.  I was in Wisconsin for the Summer Jam and he was there recruiting someone in an older age bracket.  You know, he couldn’t really talk to me but he was being cordial.  I like him.

What do you like about Michigan? I’d come to Michigan because I have history there.  I’ve never broken a bone and I broke my nose there playing when I was a freshman.  I like how they have a good football team pretty much, for the most part.  I like coach Beilein and I like the system.  It seems like they’ve done everything right.  They’re recruiting the right people.  If they get who they’re recruiting and if I could help with that, we’d be great.  Look at the season they had the year before this year and they have the potential to be a powerhouse again.  That’s what I like about Michigan.

How would you fit into Michigan’s offense? Well, I’m a good ballhandler and a good shooter and that’s what Michigan is about, having a penetrator and someone who can shoot it, someone who doesn’t turn the ball over.  And I also like to rebound.  Along with shooting a lot, I think I can just be there getting boards and hustling.

Who have people compared you to? OJ Mayo.  I just love to handle the ball and shoot off the dribble.

What ultimately goes into your decision? Location and the coaching system.  Just where the college is, like Ann Arbor?  I love it there, so that would be nice.