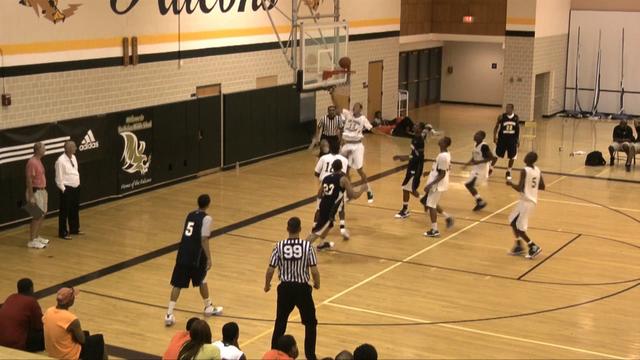 I had the chance to chat with Denzel Valentine this evening after he returned home from his unofficial visit to Ann Arbor.  Valentine was recently offered by MSU and now has a handful of high major offers.  Matt Costello was also in Ann Arbor today and we will try to get an update with him as soon as possible. For now, here’s what Valentine had to say:

What did you do during your visit? When we got there we walked around the arena, we saw the presentation of what the new practice facility is going to look like and then we saw campus, they took us down to the Academic Center.  The football stadium and the luxury boxes, then we watched practice for like an hour and a half or two hours, and then we went out to eat.

Where’d you go for dinner? We went to Pizza House.

What did you think of the plans for the new practice facility? It was very impressive.  I thought it looked nice, very up-to-date.  It’s going to be a great-looking building when it’s done.  If I went there, it’ll be done by the time I get there.

What did you think of Ann Arbor and campus? It’s a nice city, similar to the East Lansing campus.  So, it kind of looked familiar.  It was nice, I liked it.

You got to watch practice? Yeah.

What did you think? I liked it.  They started off with skills and stretching and it was just a real organized practice.  Most coaches just do the generic warmup, do drills, then you play, but it was real organized and set up.  I like how coach Beilein ran it.

You were recently offered by MSU, is there a leader between State and Michigan right now? There aren’t really leaders right now.  I’m trying to see both and I’m trying to push one school over another, so I just need to talk it over with my family this week and talk about how this went.


Any other new offers? Butler, Xavier, and Wisconsin have all offered me. (Ed: In addition to Michigan, Michigan State, Oakland, Drake and Utah.)

Any timeframe for commitment? No, but I’m kind of anxious about the decision.  Probably going to be within this year, you know, or within the next two months.

You got to watch the team, what do you think of the team’s makeup? I liked it.  I like Novak, he’s a good shooter.  I really like Tim Hardaway Jr., he’s nice.  I like all their players.  They were cool, we got to hang out with them.

Your dad was a Spartan, what went through your mind when you got the offer from Michigan State? It was a great opportunity.  It’s a high major, a step forward on my dream of being a pro.  It was really exciting, you know, it was the same thing as Michigan’s, it was exciting to get a high major offer.  When I was young, that’s what I dreamed of.