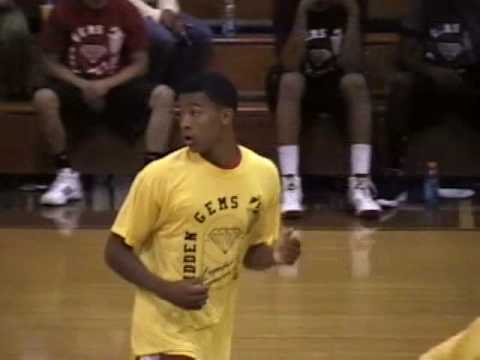 Penn State decommitment Trey Burke (Rivals #128) has recently garnered some Michigan interest. I managed to catch up with his father, Benji Burke, to discuss the point guard’s game and recruitment.

Describe his game. He’s a scoring point guard who is really crafty with the ball off the bounce and he can create his own shot. Real good shooter. He can play the 2 he can shoot it so well. His game is a lot like Talor Battle’s, but he can do a lot more off the bounce than Talor, actually.

Any plans for the rest of summer? No, he has a trainer and he’ll just meet with his trainer until high school.

Any timeframe for commitment? He doesn’t have a timeframe, I’m trying to cut the time short because I don’t want to drag it out. I would say, and this is me talking, not him, I would say I would like it in the next 3-4 weeks.

What happened at Penn State? I just think he committed a little too early, and he wanted to explore options just to see if he could get something closer. Again, I want to reiterate, we, as parents, we like Penn State still. And they are still in the mix. But I think that he felt he did it a little too early and wanted to see what would happen if he opened it up.

So being close to home is important? It’s not very, very important, but it would be good. He doesn’t mind going somewhere far away, he got people like Miami (FL) calling (Ed: they offered this week), that he wouldn’t mind going far away. But if some closer schools were interested, he’d love that. He has some schools that haven’t offered that we’ve talked to and they’re a little closer.

Does he plan on visiting Michigan? We don’t know. We’re still waiting to see what Michigan wants to do. They really want someone to come in for 2011 to prep or redshirt so they come in as the 2012 class. So that was the last we heard from Michigan, and he’s definitely interested in Michigan, because it’s a Big Ten school and it’s close. And, you know, we grew up Big Ten, so that’s something he would definitely love, to come see Ann Arbor.

Interested in redshirting? We haven’t really discussed it. I don’t think he feels like he needs to do that because of the options that he has. But I was explaining to him that it wouldn’t be bad to be able to take a year and really develop and get stronger.

What do you like about Michigan, as a parent? For one, Coach Beilein is probably one of the best out there, so that always had my interest. And he communicates well with his players. Also, he plays a style of play that a lot of kids like to play. And it’s an up-and-coming program. I know he’s only been there a couple years, but he’s trying to turn that program around and they can. Michigan has a history of a lot of pros coming out of there and he’s trying to put a positive spin on the program.

How would Trey fit into Michigan’s offense? Real good. After watching them last year, I think he could come in right away and get minutes. He’s one of those guards who can shoot it like a shooting guard but he’s a point. When people guard him they can’t afford to go under screens because he can knock it down off the dribble. So I think their style of play would definitely fit him.

Anyone else he’s compared to? I just read an article where he was compared to Rajon Rondo because he’s a competitor on the defensive end of the ball and that’s what Rondo kind of made his name on.