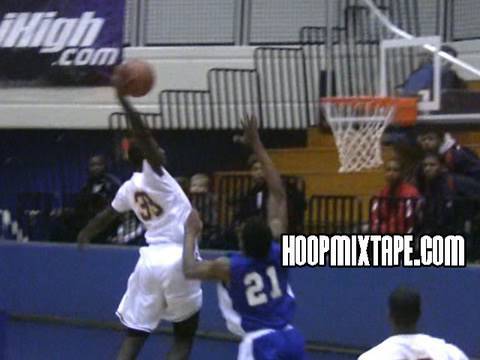 I had the chance to chat briefly with 2011 wing prospect Dominique Pointer last week and he passed along several updates on his recruitment.

Pointer is an athletic, 6-5 slasher playing with The Family this AAU season. Pointer originally went to high school in Roseville, MI before transferring to Quality Education Academy in North Carolina.

Pointer said that though he is known for his ability to play above the rim, he is also a “lockdown defender.”  He said he felt like he “definitely” played well this summer. Pointer added that he has picked up offers from West Virginia, Miami (FL), Tennessee and DePaul.

Pointer is currently playing at the Nike Global Challenge in Portland where he has impressed with his athleticism:

Pointer has a terrific wing-type frame, has off-the-charts athleticism and gets his points by attacking the rim. He takes contact well and usually elevates over the competition. He can finish with either hand and his conversions are usually of the spectacular variety. However, at his size, his jump shot needs to get better. The lift on his shot is ideal, but he tends to shoot on the way down causing his shot to be flat.

Regarding Michigan, Pointer said that, were the Wolverines to offer, they would be “up there near the top” of his list.  He also mentioned that say he would like to commit around “the middle of the college season.”

After stopping by for a quick unofficial visit last weekend, Pointer has met the Michigan coaching staff and said “they’re real nice people.” Pointer said he likes Michigan because “it’s close to home, it’s a good school, and some really good players come out of there.”