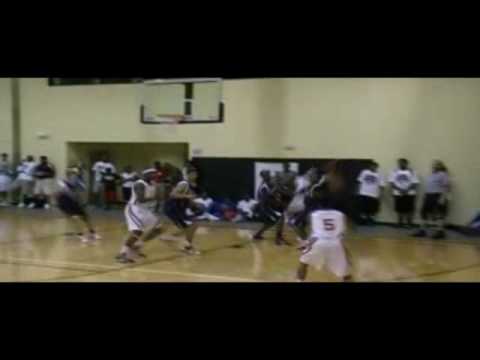 Burke, a 6-foot-1 point guard, decommitted from Penn State in May before seeing his stock rise this summer on the AAU circuit. He chose Michigan over Cincinnati, Miami, Providence, Iowa, Penn State, Nebraska and Oklahoma State. Burke is considered a scoring point guard by many but he posted strong all around numbers in his junior year at Northland HS: 14.5 points, 7.5 assists, and 3 steals per game while shooting 49% (40-82) from three point range (MaxPreps stats). It’s worth noting that Burke played for a loaded high school team that featured 2010 Ohio State commits Jared Sullinger and JD Weatherspoon.

Burke drew rave reviews multiple times on the AAU circuit this summer as well including a 39 point performance against Carlton Brundidge (who notched 41 of his own).

Joe and I saw him play earlier this spring at the King James Classic in Akron and while we weren’t necessarily focusing on him at the time (he was still committed to Penn State) it was clear that he could play. Burke isn’t overwhelming physically at 6-foot but he can shoot the ball and get to the rack. The Talor Battle comparison was a cliché cop-out at the time because he was headed to PSU, but it’s obvious why Penn State prioritized him.

Here’s video from the 2010 Buckeye Hoopfest:

April 2010 — Trey is a scoring point guard. He is good in transtion were he is crafty and scores well in the paint. He is a solid basketball athlete so he can make athletic plays he’s just not a sky walker. Burke is more of a scorer than a shooter though he is a solid shooter. He is creative offensively and can find ways to put the ball in the basket. He has a solid mid range game and has range on his shot to 22 feet. Trey makes solid decisions and is a decent creator. He is a very good defender. He uses his strength well on defense and takes pride in slowing down his opponent. For a point guard he is also a good rebounder. Burke always plays hard and is a very good competitor. He should be a solid college player after his last year of H.S.

July 29, 2010 – Trey Burke – Burke continued his strong summer with a very impressive scoring display. Though he is a point guard, Burke has the natural instinct and ability to score, and when he gets into a rhythm he can be lethal from three. With All-Ohio in the lead, Burke really got it going for himself and others, and was the catalyst in blowing it wide open for them.