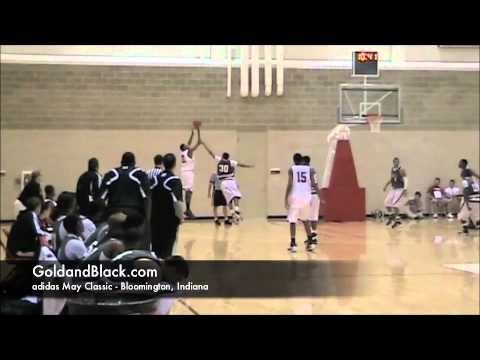 It’s obviously very early for 2013 prospects but Zak Irvin is a name to remember. The multi-dimensional rising sophomore is alreadys 6-foot-4.5 with a 6-foot-10 wingspan. Irvin has already picked up several scholarship offers (Michigan doesn’t offer sophomores until June after their sophomore year) but his interest in Michigan is clear. Irvin has already visited Michigan twice and plans to make the trip back to Ann Arbor this weekend for the UConn game along with his high school teammate Gary Harris, Michigan commitment Trey Burke, and 2012 offeree Glenn Robinson III. Here’s what Irvin had to say when I caught up with him last night:

Describe your game. I shoot the ball really well, especially from midrange.  I rebound pretty well, my ballhandling skills are average, and I see the floor really well.

What offers do you have on the table now? IU, Illinois, Purdue and Xavier.

You’ll be visiting Michigan this weekend, right? I’ll be going to the UConn game, yes.

You visited earlier as well? I’ve been there twice this summer.  One was for an unofficial visit and then the second time was to come and see practice.

You’ve met the new coaches?  What did you think? I like them a lot.  We bonded a lot and we got to know them pretty well.

What did you do on the visit? The first time I came down we toured campus, we had lunch, and they showed me the gym, the fitness center, the football field, the weight room.  The second time I came down I watched practice, wanted to see what their practice looks like.

Any timeframe for commitment? I will probably have committed to a school after my junior year.

Anything specific you’re trying to improve about you’re game right now? I’m focused on ballhandling and getting stronger.

What ultimately goes into your decision? Academics is a big point, relationship with the coach, and I would probably say team prestige.