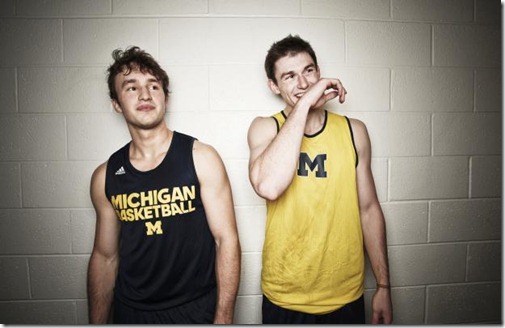 Michigan extended two scholarship offers in the class of 2012 over the last 24 hours. First, on Monday, the Michigan staff offered Canadian wing guard Nick Stauskas. Stauskas also picked up new offers from Stanford, Wake Forest, and Butler. In early August, Stauskas named Michigan his leader after an unofficial visit but he has opened things up a bit.

Today, TJ from InsidePrepSports first reported that Michigan had offered Detroit Pershing guard Sherron Dorsey-Walker as well. Dorsey-Walker is another wing guard and is ranked 74th in the Rivals Top 150. He has offers from Indiana, Baylor, Dayton, Central Michigan, Western Michigan, Oakland, Fairfield and Drake. He is the third wing guard that Michigan has offered (along with JaVontae Hawkins and Stauskas).

Michigan already has a commitment from Indiana native Glenn Robinson III in the 2012 class. In the class of 2011 they continue to recruit super wing athlete Dominique Pointer and Detroit Country Day big man Amir Williams.

Stay tuned to UMHoops for updates and reactions from Stauskas and Dorsey-Walker about their new offers. My first reaction to this news is that, despite a relatively limited number of scholarships, it is clear that Michigan is not going to sit back and wait for kids to take their time.