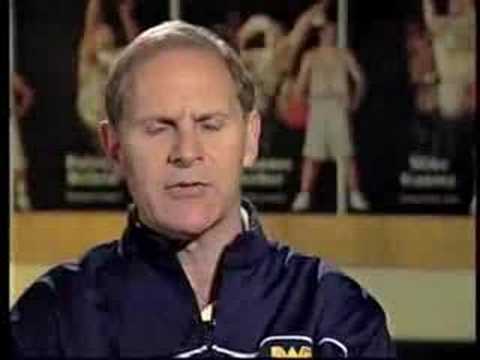 I spent some time this summer writing season previews about teams that I knew very little about. Sure every team is different, but once you simplify things, the process for previewing a team is rather routine. How good was the  team last year, how many players do they return, and do replacement players show promise. As a prognosticator, the only logical method of ranking teams in the preseason is to give the nod to teams returning the most productive players.

By that logic, it’s impossible to predict any semblance of success for next year’s Michigan squad. They return just 46% of their minutes, 31% of their scoring, 34% of their defensive rebounding from a team that went just 15-17 last year. There’s nothing else to expect when you remove not just the two most productive players, but all players over 6-foot-5, from a team that woefully underachieved. On paper, Michigan should be terrible next season.

Pointing out the reasons Michigan will struggle this year is so painfully easy that it becomes almost comical. I would look silly writing 15 blog posts about how Michigan is going to miss Manny Harris and DeShawn Sims and that Zack Novak isn’t cut out to take over 20% of the team’s shots.  Instead, here’s one reason that this year’s Michigan team could defy the odds: West Virginia 2006-2007.

That West Virginia team returned just two players from the previous (Sweet 16) team’s rotation. The returnees accounted for a mere 19% of the team’s minutes a year ago. The notable returnees were Frank Young, previously a 7 point per game scorer, and Darris Nichols, a guard that never scored more than 9 points is any game the season before. The Mountaineers were picked around 15th in the Big East but managed to finish 8th in the conference and on the NCAA bubble. After just missing the dance, they rolled to an NIT title and Beilein slipped away to Ann Arbor.

Young doubled his scoring output and was named to the all-Big East team. Nichols doubled his three point shooting percentage (21.9% on 32 attempts to 42% on 119 attempts) and more than tripled his scoring (3 to 11 ppg) and assist(1.5 to 4.6 apg) averages. Frank Young and Joe Alexander, two sophomores that combined to play just 120 minutes total during their freshmen years, both transformed into double digit scorers.

There were also seven incoming freshmen rated between 2 and 3 stars by Rivals.com. This class was highlighted by DaSean Butler, who also averaged 10 points per game that year. Several other freshmen would play but only sparingly over the course of the year. The transformation was complete. A group of players that most basketball fans had never heard of went on to win 27 games and an NIT Championship. [2007 WVU in Video Form: Preview / Highlights]

Looking at that team, it’s hard not to draw comparisons. Harris and Sims had a similar statistical effect to Pittsnoggle and Gansey. Even if they came up comparatively short in the win column, they still demanded a majority of the shots and minutes, blocking others from playing time. Beilein clearly was going to ride it out and stick with his big guns despite the team’s struggles.

The players will obviously have unique careers but comparing the roles and styles of players on this year’s squad to that West Virginia team leads to some interesting results.

Drastic improvement from every returning player is a ridiculous expectation to set, but improvement is also the one thing that John Beilein has hung his hat on throughout his coaching career. When he was hired, many pointed to that 2007 team’s performance as one of his most impressive. The 2008-09 Michigan season was another that showed dramatic improvement, in the form of an 11 win turnaround.  Of course, it’s tough to buy into any improvement talk when last year’s squad regressed across the board and made an anemic number of three point shots.

Michigan won’t be West Virginia, and they shouldn’t be picked anywhere other than the bottom third of the conference. However, there are reasons to believe they could show some signs of life this year. At the very least, this is reason not to pass judgment on a number of players who haven’t played or have played sparingly.