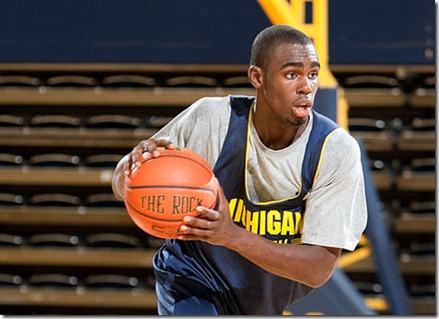 When Tim Hardaway Jr. committed to Michigan, after their team camp last summer, he had only two other high major offers (Kansas St. and Minnesota). He proceeded to have an strong AAU season before an even better high school season, averaging 32 points, 7 rebounds and four assists during his senior year. John Beilein got to Hardaway early, secured his commitment and watched him play very well for the next 12 months. Now it’s time to see what he can do at this level.

From what Beilein has let on on thus far, Stu Douglass and Darius Morris will be vying for the point guard spot. Zack Novak has the ability to play “any position but the five” but will likely start off playing major minutes at the two while sophomore Matt Vogrich is learning both the two and three. The plan for Hardaway is to groom him as strictly a three, Manny Harris’ vacated positions, leaving plenty of opportunity for the freshman.

I had the opportunity this summer to see Hardaway practice with the team and here’s some of what I saw:

Tim Hardaway Jr. is on the fast track right now. He’s picking things up very quickly, even the upperclassmen are surprised. One thing he has that most guys don’t: the ability to stop on a dime and hit an in-control pull-up jumper. Most guys don’t have that in their arsenal, but Tim definitely does and he knows how to use it. It’s a great weapon to have, especially on fast breaks.

Hardaway wasn’t just one of the most impressive players at practice state-side, during the team’s trip to Europe, Hardaway was Michigan’s leading scorer with over 11 points per game and pulled down four rebounds per game. He was also very efficient, with a 54% effective field goal percentage. When interviewing players at practice, a few pointed out Hardaway by name as a freshman who already “gets it.” Essentially everything we’ve seen and heard out of the summer about Hardaway has been positive, and suggests his learning curve might not be very steep. Most recently, he was noted as the leading scorer in Michigan’s first scrimmage.

Reasons to Be Excited

I, like just about everyone else, have high hopes for Hardaway in his first year. I have been very impressed from what I’ve seen of him, from his defense to his shooting to how he interacts with his teammates. He appears to be the most college-ready freshman on the Michigan roster. I see him getting a lot of playing time early on and developing as one of the first two or three offensive options. In terms of numbers, a double digit scoring average and four or five rebounds per game doesn’t seem unreasonable. Hardaway will have his freshman moments, and he’s already drawing a lot of hype, but there are already plenty of reasons to be excited about the Miami native.