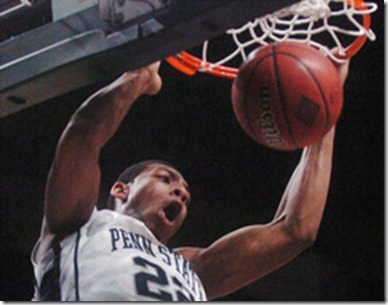 Next up in our Around the Big Ten series is Penn State courtesy of Eric Gibson of Raise The Curtains. Eric was kind enough to answer some questions about Talor Battle and his supporting cast.

I guess you have to start with Talor Battle. He averaged 19 pointss per game, shot 35% from three and led the team in everything points, rebounds, steals, and assists. However, it still feels like the season was a bit of a disappointment thanks to Penn State’s 11-19 (3-15 B10) finish. What was different about Battle last year and what will he need to do this year to get Penn State in the win column more often?

Not sure what more you can expect from the guy, honestly. It’s hard to call him selfish because he does make the effort to get his teammates involved. They just wouldn’t produce last year, so Talor would let his competitiveness take over and he’d try to do it all himself. Ideally you would like to see his shooting %’s increase, but he’s going to take so many contested shots that I think it’s asking for a bit much. He still needs to produce better from the foul line, though, for how much he gets fouled. No excuse there.

Tell me about the inbound and outbound traffic in State College, PA. Breakdown the freshmen, transfers, and graduates.

The long season last year apparently was rough on a couple guys. After the NIT run, we were expecting to watch this team grow  last year and then return everyone for this year (there were no seniors last year). However, Chris Babb and Bill Edwards transferred (Iowa State, Miami OH respectively), and Andrew Ott passed up his last year of eligibility (he already graduated). Babb is the biggest loss because he was poised to become our 2nd scorer. The mass exodus left the staff with 3 open scholarships in the spring period and some holes in the roster. They had already signed Battle’s brother, Taran Buie, in the fall. He’s a 6’2″ combo guard who is expected to be the biggest impact freshmen. More of a penetrator than Talor and not quite the shooter. He’s supposedly a better defender and has the same fearless mentality of Battle’s. I’d be surprised if he doesn’t crack the starting lineup this year. They filled 2 of the 3 scholarships in the spring with Tre Bowman – a 6-foot-4 shooting guard – and Jonathan Graham – a 6-foot-8 forward. Graham will play if he’s ready, especially with Sasa Borovnjak’s torn ACL suffered a few weeks ago. Seems like a fundamental post player with limited athleticism. Bowman physically looks like he could step in and play right away but there’s some depth in the backcourt already, so he has to overcome some competition.

Last year it was Talor Battle and not much else, who is poised to step into a secondary scoring role and produce consistently?

David Jackson is who I think the coaches are hoping for. He quietly scored 10.7 PPG with a 57.2 eFG% in Big Ten play last season. DeChellis has been preaching that they want him to take more shots and be more assertive. Buie is a natural scorer and he isn’t afraid to pull the trigger, so he’s another candidate to put up some points. The only other guy I can see scoring in double digits is Jeff Brooks just because of his build. His length and athleticism makes him very comparable to Mike Davis at Illinois. However, we’ve been waiting for him to consistently produce for 3 years now and it hasn’t happened so I don’t think too many people are holding their breath.

What four players are most likely to start alongside Battle on opening day?

Well the 3 seniors are definite – Andrew Jones at the five, Brooks at the four, and Jackson at the three. The other backcourt spot is up for grabs. I’m expecting Buie to take it by the time Big Ten season rolls around. If I had to guess, I would say Tim Frazier will fill the other spot to start the season.

What are the two greatest strengths and glaring weaknesses for this year’s Penn State squad?

Tough question because I’m not really certain about this squad. Their experience is that old double-edged sword controversy. Do you really gain anything by returning the same guys who went 3-15? But I think it’ll be a strength for this team. And I guess you would say rebounding, since these guys led the country last year in defensive rebounding. An obvious weakness is the lack of a proven, reliable scoring option outside of Battle. I think they have some options for guys to fill that role, but we’re all in wait-and-see mode. The frontcourt would be the other obvious weakness. There’s not much size or depth. Jones is the only big man capable of defending legitimate bigs, but he’s not really great at it and if he gets in foul trouble, we’re screwed. With Borovnjak’s injury, Jones is the only guy bigger than 6’8″ 220. Ed’s been talking about going small, picking up the pace, pressing, and what not. It would make sense with the lack of beef on the roster, but it seems like Ed’s been saying this that last 8 years he’s been here and it has never really materialized. We’ll see.

14-15 (6-12) – They have a pretty solid non-con. Some quality mid-majors like Fairfield and Lehigh, some bubble teams like Mississippi and Maryland, plus a tough road trip to Virginia Tech. The Big Ten slate is tough again as they only play Iowa and Indiana once. I think the ceiling for this team is 18-11 but a lot would have to go in their favor. I think what most PSU fans are dreading is what’s most likely going to happen. An NIT-like season that will somehow keep DeChellis employed longer.

I’m going with the true freshmen Jared Sullinger over JuJuan Johnson. Jared just looked like a monster when I watched him in high school (when I would watch their games to see Burke – I’m very bitter about that situation). I don’t there are too many guys in this conference that can account for his size and quickness on defense.

I’ll go with KJ’s pick and say Jordan Taylor. He’s going to have a big year for the Badgers. I think Creek will have a big year, too, if he stays healthy. But he was already averaging 16 PPG last year, so I don’t think he could be considered ‘improved’. I’d put him in for something like “Comeback POY”

I’ll go with the Buckeyes. Purdue has injury problems and MSU has all sorts of off the court drama to deal with. I was really, really tempted to pick Illinois.

I think Wisconsin’s record in the Kohl Center speaks for itself. Although, PSU completely gave them the ‘W’ in their building last year.

Do you think you win your Big Ten/ACC challenge game [versus Maryland]?

Who knows. I think it’s a pretty even match up, as of now. I’m just glad we finally got a home game after two years on the road. But I have to see what Maryland is looking like without Vasquez before I really have confidence in a pick. I’ll be a homer for now though and say PSU wins, boosting their Big Ten/ACC win streak alive to 4.