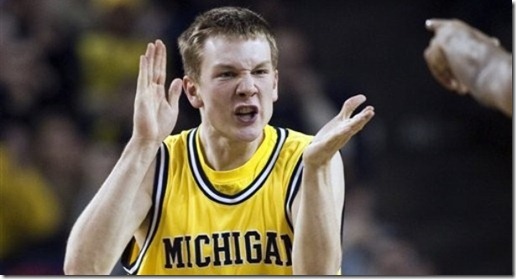 Matt Vogrich arrived at Michigan touted as one of the best freshman three point shooters in the country, but what a lot of people forget is that he had a multi-faceted game in high school. He was heralded as not just a shooter but a guy who could score in a variety of ways.

Last year, Vogrich saw limited playing time and didn’t get a chance to really show his stuff. What we did see was somewhat encouraging from an offensive standpoint. He clearly has a very good jumpshot and could very well be Michigan’s best pure shooter. He also did a serviceable job rebounding the ball for his size. But defensively, he was a liability whenever he entered the game — a big reason that he didn’t earn more playing time. Vogrich just didn’t look like he was physically ready for the college game, but took steps to remedy that probably in the off-season — adding 15 pounds of muscle to his frame. At Media Day he said he hoped this would help him when going to the basket and on the defensive end. Either way, as one of the few "experienced" Wolverines, he will likely play major minutes this season.

What He Did Well

Matt Vogrich will be expected to bring much more to the table this season than he did as a freshman, and he seems ready to do just that. He has incorporated a pull-up jumpshot into his offensive arsenal and got a lot of time to work out with the coaches before he headed to Europe with the team. He said at media day that he he feels "like a different player," and that the bulk he added in the offseason will help him out a lot on the defensive end.

I tend to agree with him. Vogrich can play, but the combination of limited minutes and being unable to stay in front of his man without fouling last year didn’t allow us to see a whole lot from him. In Europe, Vogrich appeared to show marked improvement. He was the Wolverines’ third-leading scorer with 9.3 points per game — including a 22 point (8 of 11 shooting) game — and put up a whopping 72% effective field goal percentage. He also happened to be Michigan’s leading rebounder with almost 5 per game.

Bottom Line: There will still be moments of weakness defensively, but look for Vogrich to become this team’s number one three-point shooting threat. He has the silkiest jumper on the team and will get plenty of opportunity. Points are going to be hard to come by for this Michigan team, but when looking for potential “break out players,” Vogrich should be near the top of the list. There are still plenty of question marks surrounding Vogrich’s game, but it wouldn’t be out of the realm of possibility to see him near a double digit scoring average.