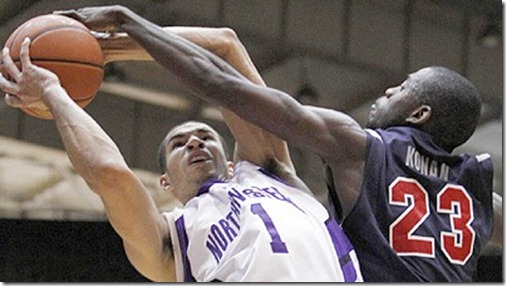 Next up in our Around the Big Ten series we have the Northwestern Wildcats. We interviewed Lake the Posts for an all encompassing look at the Wildcats’ upcoming season.

Last year was supposed to be the year that ended Northwestern’s NCAA tournament drought but the Wildcats fell short. Is this the year that they finally get over the hump?

From a guy who lived several years on Addison Street a couple blocks from Wrigley – of course THIS is the year! I’m not going to lie – the Kevin Coble departure sent me back in to the "Forgive me basketball Gods, for what have we done to deserve this?" plea AGAIN.  The ‘Cats would’ve been returning the top 2 scorers in the ENTIRE conference over the past two seasons.  I think many NU fans and the program are so in shock that we’re clinging to the notion that we lost only Jeremy Nash from last year and added our highest rated recruit in memory with JerShonn Cobb to ease the pain. I’m not buying the fact that a 20 ppg scorer and a winner wouldn’t have made this season a lock for the Big Dance.  Seriously, though, this has to be the year. Drew Crawford is the man to watch as I believe he will be our make-or-break to the season.The competition in the conference certainly isn’t getting much easier.

How do you explain Kevin Coble’s departure? Fans across the Big Ten (and I assume in Evanston as well) were baffled by his decision to hang it up before this year’s season. Is there something that we’re missing?

I’ve had several sources confirm that it was more than just the injury not healing right.  Kevin is a unique guy and allegedly had become distant from the team.  The heart of the matter, I believe, was the relationship he had with Coach Carmody, which respectful and professional, was not the stuff that made them want to embrace.  It’ll be several years before we fully know, but I just can’t imagine Kevin Coble walking around campus this fall completing his degree as his teammates are playing games. Crazy, crazy stuff. The type of thing that evokes the (and I cringe to do this) "only at NU".

Kevin Coble is gone but John Shurna is about as close to a clone as you get. Shurna did it all last year so tell us about his game and what to expect this year.

Indeed you nailed it. He’s a Coble clone. Crafty, awkward looking shot, deceivingly quick, but just money in the bank down the stretch. He’s made huge strides each offseason and word was he tore it up as a member of USA Basketball this summer.  Allegedly he took it to Lamar Odom (as confirmed by Carmody at media day today).  The kid is just a winner. Doesn’t look pretty doing it, but 20 ppg in the Big Ten doesn’t come without greatness.  It is clearly his team and Juice Thompson’s team.  I expect him to really step up as a more vocal leader and take Crawford, Cobb and the others under his wing.

Michigan fans are all too familiar with Drew Crawford after he lit us up in Ann Arbor — what do you expect from Crawford this year? Does he have another level?

Indeed. He has a whole ‘nother gear (sorry Michigan).  He was dinged up down the stretch and admittedly getting caught up by the season. Word on the street is he worked his butt off in the offseason and expectations are for a quantum John Shurna-like year one to year two leap.  He is the single most exciting player I’ve ever seen at Northwestern. The sky is the limit. He’s the first no-brainer NBA player at NU since Evan Eschmeyer.   He is adored by fans and can take over games as you saw last year (don’t feel bad – he had 11 straight vs Purdue to beat them as well).  The only down side was he could disappear for stretches. I expect consistency to be the name of the game for Drew this season.

Northwestern can score the ball but their defense was the worst in the league throughout conference play. Couple that fact with Jeremy Nash’s graduation and there are question marks on the defensive side of the ball? Do you have any answers?

Not yet.  Great trivia question isn’t it? Which team led the Big Ten in scoring last season? Answer: Northwestern. The myth of the "Princeton offense" is that we don’t score.  The associated other myth is that we play good defense. We can be downright brutal on D, but at least our rebounding has modestly improved.  I think NU fans – even though we know it inside – are deeply underestimating the impact of the loss of Nash.  He was not only a great on and off the ball defender, but he dictated the other teams’ offense.  This was huge as it gave us a big advantage.  We have some major holes to fill and my biggest concern is actually on the interior as passing lanes from the point should open up with Nash gone.

What are the highlights of Northwestern’s non conference schedule? Any marquee games or pre-season tournaments?

This is the big mistake. Our non-conference schedule is a joke.  I can’t sugarcoat it.  Georgia Tech in the Big Ten/ACC challenge and that’s it. The rest of it is actually really bad scheduling and Carmody should know better. We’re playing RPI killer after RPI killer making it such that we HAVE to go over .500 to have a shot at the NCAA Tournament.  Not even the most purple of Wildcats can rationalize this non-conference schedule as making sense. Not with THIS team.  Check it out – NIU, Texas Pan-Am, Creighton (#2 on list), Arkansas P-B, Long Island, American, Mount St. Mary’s, SIU-Edwardsville. Are you kidding me?