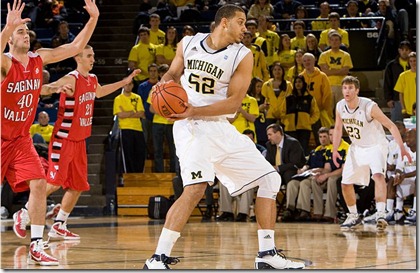 It’s been a long road for Jordan Morgan since he arrived on campus in the summer of 2009. Before his freshman year even began, he injured his knee was forced to undergo surgery. Once he was healthy, he quickly injured his shoulder and was shelved again. After spending a large portion of the offseason rehabbing, Morgan is finally healthy and ready to play.

As it stands today, Morgan is the starting five man on this year’s squad. He’s risen above Michigan’s other two options at the five, Blake McLimans and Jon Horford, but it remains to be seen how he will fare against bigger and stronger competition. All three players bring vastly different games to the table but Morgan’s appears to be pretty simple: rebounding.

Early exhibition returns are certainly positive. Facing off against SVSU’s undersized front line, Morgan was very impressive in Michigan’s exhibition — he cleaned up the glass (10 def. and 5 off. rebounds) and finished a number of looks around the bucket (9 pts). Obviously he isn’t going to pull down 15 boards per game, but he played the style of game that Michigan needs from him — rebound the basketball and make easy baskets.

Reasons to Be Excited

Morgan’s role is very different than McLimans’ – stretching the floor – but the two should complement each other well. Morgan needs to be the grinder – the person that cleans up on the glass, sets screens, and does the dirty work in the post. Whether he’s ready or not, he’ll be the guy called upon to bang against big bodies in conference play like Jared Sullinger or Derrick Nix.

Offensively he doesn’t need to be featured but needs to score his points by staying active and making his bunnies. Hit the offensive glass, set good screens, finish off dump offs from guards, and hit the occasional mid-range jump-shot. It won’t be glamorous but if Morgan can do enough of the little things, Michigan won’t need him to over-exert himself on the offensive end.

Something like 4-5 points and 5-6 rebounds in 25 minutes per game seems like a reasonable estimate for Morgan’s production. It might be better to judge Morgan’s performance not by his individual numbers, but by opponents offensive rebounding numbers. Rebounding is certainly a team effort, but if Michigan is posting a respectable defensive rebounding percentage, that’s a sign that Jordan Morgan is doing his job.