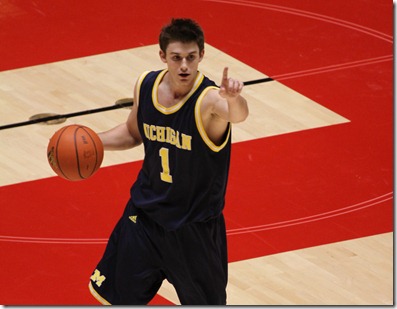 Last year, Stu Douglass was one of a trio of supposed shooters for Michigan who couldn’t seem to put the ball in the basket from deep. Douglass, Manny Harris and Zack Novak were three players who certainly should have been able to fill it up but for whatever reason posted 3-point field goal percentages that hovered around 30 percent. For Manny, it was mostly his hamstring. For Novak, it’s appeared that he was tiring himself out boxing out and defending players much bigger than him. The jury is still out on Douglass, who shot 32.9% from three, and the key to his season will be whether or not he can turn it around from long range.

One issue that contributed to his poor shooting was the fact that Douglass was forced to play point guard for long stretches. Darius Morris was expected to take a strangle hold on the point guard spot as a freshman and allow Stu to play his naturally off guard role but two things became clear very early on: Morris was really the only point guard on the roster and he wasn’t ready to play 30+ minutes per game. This forced Douglass to play a lot of minutes at the point guard position. His function on this team should be primarily to catch and shoot, which is why it’s so imperative that he starts making those open 3’s he couldn’t knock down last year, but it also looks like he’ll still back up the point guard slot as well.

John Beilein said at Michigan media day that Douglass would be battling Morris for the starting point guard spot, but if the exhibition game against Saginaw Valley State is any indication, we will likely see Stu at both the one and two. It’s safe to say that if Darius continues to play as well as he reportedly has in practice, the starting point guard job is his. Zack Novak looks like he’ll be primarily playing the 2-guard, and he is likely to play significant minutes. The lineups are fluid right now but Stu played some point guard and some two guard in his 21 minutes during Michigan’s exhibition game versus Saginaw Valley.

Reasons To Be Excited

Stu Douglass will be at his best as a catch-and-shoot guy when he’s on the court. In the exhibition game he showed flashes of taking the ball to the hoop, but it remains to be seen if he can do this against higher level competition. His role should be primarily shooting and now that Darius seems to be taking over at point guard, there’s reason to believe he’s moving back into that role. The only issue is whether or not his shot will follow him there. If it does, you’re looking at a very productive season. If it doesn’t, well, then you’re looking at last season but without all the starts at point guard.

Ideally, Douglass will play significantly less than last year’s 33 minutes per game, allowing him to fill his role and hit a few three point shots. He will spell Darius at point guard, where he’ll be what he was last year: a sure-handed guard who knows the offense inside and out but most likely won’t create much off the dribble or create a lot of offense for others. But for the vast majority of his minutes, he should be looking for his shot and little else.