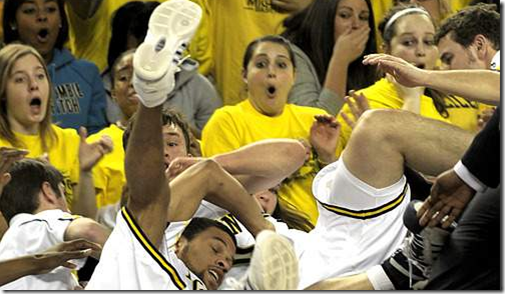 Zack Novak is one of the few known quantities on this Michigan team. He started 53 games in the first two years of his college career and averaged 33 minutes, 7 points, and four rebounds per game last season.

It’s tough to succinctly define Novak’s game. He stands about 6-foot-3, despite the roster stating otherwise (he’s actually 6-4 this year, rather than 6-5), and has played the power forward for a majority of his first two years in college. Offensively he’s been inconsistent – capable of bursting for 20 points at any time but often times reduced to a non-factor. On the defensive end, he does all the little things and influences the game in ways that can’t be measured on the box score.

Novak’s role looks to change this year as Beilein plans to move him to the off guard, a position he’s only played for short stretches of his career. Novak’s most notable performance at the two guard was versus Duke when he netted four three pointers for 14 points. I don’t think he’s a perfect match for any single position on the court but two guard appears to makes the most sense at this time.

Tim Hardaway Jr. and Evan Smotrycz are both going to play major roles in this offense but Novak will also shoulder a bulk of the scoring burden. He’s Michigan’s most efficient and experienced returning offensive player and the shots are there for the taking. Improving on his 7 points and 4 rebounds per game should be a given, 10 points and five or six rebounds per game seems to fit the reasonable range of expectations.

He will undoubtedly cameo at the power forward spot, especially early on and if either freshman (Smotrycz or Christian) struggles out of the gate, but he should play the majority of his minutes at the off guard. Don’t expect to see Novak off the court often; with his versatility and such a young team, I would expect to him play even more than the 33 minutes per game he averaged last year.

The encouraging news is that Zack has consistently been mentioned as the most consistent player in practice. He also averaged 10 points and three rebounds in Europe and should be ready to the ground running. Getting off to a quick start would definitely be a pleasant surprise for Novak who was shooting just 27% from three entering conference play last year.

Quotable: “I remember my freshman year someone kept complaining to the refs about what I was doing,” Novak said, shaking his head. “I said: ‘Bro, I’m like 6-2. What are you complaining about? You should score on me every time. What’s going on?’” – NWITimes.com