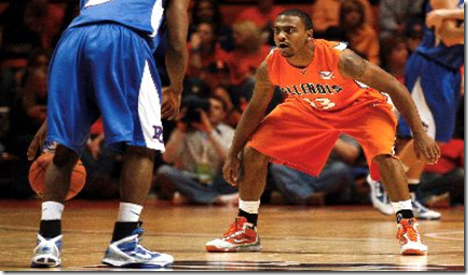 Another day another Big Ten preview. This time we focus on Illinois with an interview of Joe K from Hail to the Orange.

Demetri McCamey had the highest assist rate in the country last year and averaged 15 points per game to boot. What can McCamey do better this year? Can he play any better?

Demetri can, and probably must improve his defense. He was the most important player on the court for the Illini last season, with nearly all of the offense resulting from either his shooting, or his passing. Last year, Bruce didn’t trust anyone else to handle the ball, and no one else could actually drive the lane, but by the same token, in close games, Bruce couldn’t trust Demetri to stay on his man on the defensive end. The result was often that Demetri would be pulled after making a shot and then immediately subbed back in when the Illini got the ball back, for the sake of consistency, we need him to be better on defense.

Some people are picking Illinois as a sleeper pick to make a run at the Big Ten title, but the Illini didn’t even make the NCAA tournament last year. What are your expectations for the upcoming season?

My expectations are high, but I wont be disappointed if we don’t win the league, neither would I be all that surprised though. This team looks like it is absolutely loaded with talent right now, and is getting contributions from two freshmen that will ease the burden from the seniors. Last year’s failure to make the NCAA tournament can be traced back to the key losses early in the season, against Utah and Bradley, as well as a couple key losses later in the season against Northwestern and Minnesota. All four of those games are ones we should have won, and all four of them we let slip in the second half. If the seniors have better disciplined themselves against those sorts of let downs, which I believe they have, this team will be very, very good this year.

Breakdown the incoming players and any notable departures — what freshmen are expected to make an immediate impact?

The only departures from last year’s team seem to be the players that well, caused the most problems for coach Weber, but on the bright side, made very minimal contributions to the team. (Jeffrey Jordan, Dominique Keller, and Alex Legion.) Freshmen wise, two names stick out as immediate contributors, McDonald’s All American Jereme Richmond, who will probably move into the starting lineup before too long, and seven footer Meyers Leonard, who will be the primary backup for Mike Tisdale this year. Both of these players are exciting because they add something to the Illini that we lacked last year, Richmond with length and inside play from the guard position and Leonard with a stronger inside game as compared to Tisdale’s step back hook shot game. They give Weber flexibility that will hopefully be very useful when playing teams like Pitt and MSU.

DJ Richardson had a great freshman year for the Illini

DJ Richardson and Brandon Paul were both highly touted freshmen for the Illini last year. Richardson won Big Ten freshman of the year while Paul took a more secondary role. How do both players fit into Illinois’ plans this year and where do they need to improve?

Brandon Paul seems to have taken the role of back up point guard, and will get lots of minutes when Demetri needs a spell. Paul needed to find consistency last year, after starting off incredibly hot and then kind of falling off the map. He has relied too much on his three point shooting, even though he has the skill set that should allow him to drive the lane much more often.

D.J Richardson on the other hand has become the team’s best defender, a very reliable three point shooter and probably has entrenched himself in the starting lineup just as much as Demetri, Mike and Mike. D.J can play an unassuming game but every once in a while can absolutely go off, especially when he is left open for the catch and shoot, he may not have as much upside as Brandon Paul, but he has hit his stride much faster.

It feels like Mike Tisdale and Mike Davis have shot more than 10,000 mid range jumpshots since they arrived in Champaign. Should we expect anything different from them?

Nope. Tisdale put on some more weight in the off season, and Davis got stronger, but their game is their game, and it has gotten them pretty far so far. Don’t expect too much of anything different from either of them this year, with the exception of maybe consistency.

What are the highlights of Illinois’ non conference schedule?

Well it is a bit loaded. The Coaches vs Cancer tournament pits us against Texas and then either Maryland or Pitt. Then we have North Carolina at home, Gonzaga in Seattle, and Mizzou in St. Louis. I don’t think strength of schedule will be a problem for us this year.

Will the Michigan-Illinois basketball game see more points than the football game?

Not unless Greg Robinson starts coaching your defense and Manny Harris suddenly comes back to play. Its the Big Ten, games don’t get much higher than around 65 anyway.

Maybe I am being too optimistic here, but I total two pre-conference losses and 14-4 in the Big Ten being very possible, but I could be completely off the deep end here.

Well, Manny Harris and Evan Turner are gone? Hummel is injured? I guess I have to go with JaJuan Johnson, he is going to be a force this year.

From every thing I have heard, if it is even possible David Lighty is going to be even better this year.

MSU, until they show me otherwise, they are still the best around

Wisconsin, playing in the Kohl Center is a very different experience

Do you think you win your Big Ten challenge game [versus UNC]?

Do I think we we will win? I don’t know. I don’t know if Harrison Barnes is as good as advertised, I don’t know where this Illini team will be after playing in Madison Square Garden, if I had to pick, I would say, right now, no.