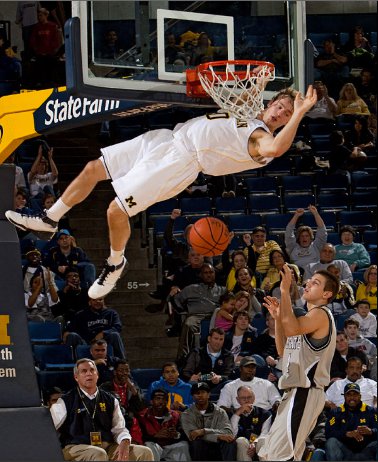 It wasn’t necessarily pretty but it was certainly convincing as Michigan rolled over South Carolina Upstate for their first win of the 2010-11 season. Michigan outscored the Spartans 66-35 in a 58 possession game. There were ugly stretches, including a lengthy first half drought, but the outcome of the game was never in question after Michigan jumped out to a 24-5 lead. The star of the contest was obvious: freshman wing Tim Hardaway Jr., who scored 19 points on 6 of 12 shooting in just 25 minutes.

The four factors tell the whole story as Michigan outshot and outrebounded USC Upstate while attempting almost twice as many free throws. To put Michigan’s rebounding into context, they only posted an offensive rebounding percentage this high (39.6%) in five games last season. Turnovers were a wash, which was a bit surprising given each team’s history (or lack thereof) of taking care of the ball. Michigan looked surprisingly shaky holding onto the ball at times, but several turnovers came late in the contest when things became increasingly sloppy overall.

Darius Morris played very well again, adding 17 points on 10 shots, while Zack Novak and Stu Douglass were both solid. One major concern watching tonight’s game was that Michigan has very few options for interior scoring. It wasn’t until 11:45 in the second half that one of Michigan’s three centers put a notch in the scoring column, via a Blake McLimans free throw. Morgan, McLimans, and Horford combined for 10 points and 12 rebounds when all was said and done but were only 2 of 6 from the field.

USC Upstate is not a good team. It remains to be seen just how bad of a team they are, but at the very least it’s good to see Michigan take care of business in a game they should win.  Next up is Bowling Green, a team that dropped their season opener on the road to Howard. Player bullets after the jump.