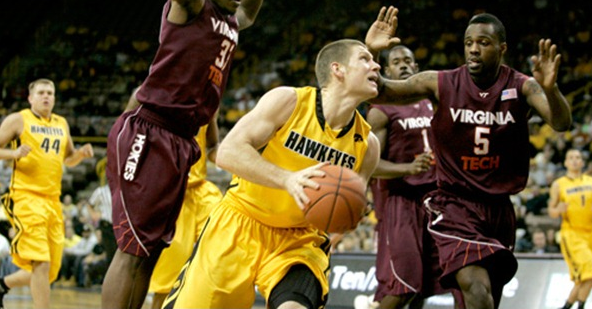 Iowa is the next school in our series of Big Ten previews and this time we had to call in a ringer for assistance. Josh Reed, one half of the Big Ten Geeks, agreed to step in and talk Iowa hoops. [Ed: It’s worth noting that this was all put together before Iowa lost to South Dakota St. on Sunday afternoon]

Fran McCaffery brings a radical level of change to Iowa City. What will the most immediate changes be? Do the Hawkeyes have the pieces to run his system?

Taking your last question first–why yes, the Hawkeyes definitely have the pieces to run his system! McCaffrey would have loved to trade the athletes he convinced to play for him at Siena for the ones waiting for him in Iowa City. Not taking anything away from the Saints, but even the worst Big Ten team is going to attract better athletes than the best MAAC team. Now, that doesn’t (obviously) always translate into on-court success, but there’s no blaming the growing pains on square pegs and round holes.

As to your first question, the obvious answer is speed. Lickliter is one of the slowest (hovering around 60 possessions a game) and McCaffrey is one of the fastest (around 70 a game). That’s the quick answer. The more nuanced answer is how that philosophy bleeds into everything else (and/or vice versa). For instance, instead of trying to win World’s Strongest Man competitions, the Iowa players are shedding pounds this offseason. Furthermore, Iowa’s offense was patient in part because they probed the defense for open three-point shots. McCaffrey’s uptempo system, on the other hand, generally disfavors threes. Now, one might think that a Lickliter-recruited team therefore has too many shooters for the McCaffrey system. I disagree, on philosophical and factual grounds. For one, you can never have too many shooters. But in any event, Iowa isn’t exactly loaded with sharpshooters, making under 32 percent of their attempts last season.

Breakdown in the incoming and outgoing players for Iowa. Who are the best freshmen in Iowa’s class? What players graduated and transferred?

For the fourth season in a row, Iowa lost its arguably would-be best returning player to transfer. This offseason’s honor goes to Aaron Fuller, one of the best rebounding players in the Big Ten. No small feat for a guy who stands a mere 6-6. Also hitting the ol’ dusty trail is rising junior Anthony Tucker, who showed a ton of potential when he wasn’t battling off-court issues. Then there’s John Lickliter, who transferred for obvious reasons. Moving on, there was the case of the filled-out Brennan Cougill, who was declared academically ineligible for the upcoming season. He chose to enroll at Kirkwood Community College, where one hopes that he hits the books. The only player in the rotation that actually exhausted eligibility was Devan Bawinkel, who attempted 228 shots as a Hawkeye. A Lickliter-pleasing 223 of them were three pointers. I can say with some confidence that Fran McCaffrey is not terribly concerned with his absence.

As for the freshmen, McCaffrey is bringing in a pretty good class considering the circumstances, bringing in four 3-star recruits. I’m not sure that there’s a lot of separation between them, but Zach McCabe and Melsahn Basabe figure to see the most action simply because of Iowa’s lack of frontcourt depth.

On paper, Matt Gatens appears to be Iowa’s best returning player. What will we see from him this year and how does he fit into McCaffery’s system?

Yes, Gatens will likely lead the Hawkeyes this season, and you really have to admire the guy’s loyalty. He committed to Iowa just after his freshman season to Steve Alford. He maintained his commitment to Lickliter, even when the program headed south and everyone around him was packing their bags. And then this McCaffrey guy shows up, and promises to 180 the team’s style of play, and–lo and behold–Gatens is still there. I think he’d still be a Hawkeye if they hired me as their coach.

Most probably think of Gatens as a three point specialist, and that’s probably because he’s such a good shooter (though his numbers dipped last season). The truth is, however, that he shoots just as many twos as threes–and that was within Lickliter’s system. I think we can expect to see him show off the diversity that he displayed as a recruit now that he’s in McCaffrey’s system.

Break down Cully Payne’s game. The sophomore guard has shown signs of being a very good player.

Watching Payne last year, you would see him make a very nice play a couple of times a game, but the rest of the time he seemed to be operating without a plan out there. This is somewhat typical of freshman point guards, and it showed up in his unacceptably high turnover rate. This was exacerbated by the fact that Payne played more minutes than he probably was ready for, simply because of Iowa’s attrition issues. Those minutes were supposed to go to Jake Kelly. Or Jeff Peterson. Or Jermain Davis. The good news is that year two usually brings a precipitous drop in turnovers, so we should see some improvement from Payne there. Even so, Payne needs to work on his shooting in order to be a real offensive threat.

Iowa scored 111 points in an exhibition game, I know it’s just exhibition but this is a radical change. Will this hold up?

I try not to get too worked up over exhibition games, because, well, they’re exhibitions. Some nutty stuff can happen. Even looking at things like pace, as teams tend to go a bit faster in the exhibition schedule (and non-conference…at least Big Ten teams do). All that said, there’s no amount of discounting that can ignore the fact that Iowa played an 80 possession game, and devoted under 30 percent of their attempts to three pointers. Changes are coming.

Who is poised to be the most improved player for the Hawkeyes this season?

It’s probably a popular pick, but I’m going with Eric May. He’s the best athlete on the team, and really, the biggest problem he had last season was taking too many threes. A McCaffrey-esque shot selection should do him wonders.

Well, I’m not sure what the Iowan point of view on this is, but for my money, it’s Jon Leuer. I think outsiders to the Big Ten think of the Wisconsin senior as the prototypical plodding midwestern kid that elbows his way to double figures, but the truth is that Leuer is one of the most versatile big men the conference has seen over the past decade. Sure, he does all those big man things like score inside and rebound, but he’s also an above average ballhandler (yes, he will take you off the dribble), and shoots a cool forty percent from three. He really ought to be in Chad Ford’s columns.

I said it then, I’ll say it now: Christian Watford.

I wish there was a way to “neutralize” this metric. The reality is that it’s tough to play wherever the teams are good. If Bill Carmody somehow got Kyrie Irving, Jared Sullinger, and Harrison Barnes to head over to Evanston, then suddenly Welsh-Ryan would be the toughest ticket in town. So I’ll do my best to answer this based simply on the typical atmosphere I’ve observed over the past decade or so. In my opinion, there are three teams at the top which, when said teams are playing well, are terrible places for the opposing team to visit: Wisconsin, Michigan State, and Illinois. Any further distinction between those three is beyond my capabilities.

No. Both Iowa and Wake figure to end up in or around their respective conference cellars, but Iowa is on the road here.