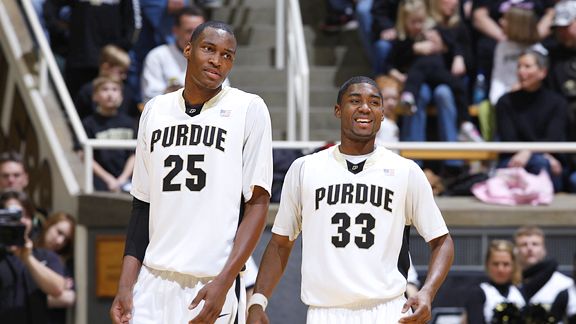 In our final Big Ten preview we look at the Purdue Boilermakers. We’ve watched the “Baby Boilers” of three years ago grow up and they continue to be snakebitten by injury. This year is no different, as Robbie Hummel went down with a knee injury during the first week of practice in West Lafayette. We called on T-Mill, from Hammer and Rails, to help us preview our final Big Ten squad. I’ll have a wrap up post summarizing and comparing all the previews c0ming up shortly.

Robbie Hummel’s injury was obviously devastating for Purdue. How does it change your expectations for the season?

After going through the initial mourning period (and yes, it was a mourning period) I discovered that the goal is still the same: a National Championship. Achieving it now is just more difficult. Purdue has more depth in the low post than at any other time during Matt Painter’s tenure. In nearly every loss last year that lack of depth was exploited. Sandi Marcius, Travis Carroll, and an improved Patrick bade will take the heat off of JaJuan Johnson. and will greatly improve our rebounding ability.

As far as replacing Hummel’s scoring, I saw how that can be done last night. D.J. Byrd and John Hart were 8 of 10 from 3-point land last night, while Ryne Smith is also a long range shooter. Freshman Terone Johnson can also contribute scoring off the bench and may be starting by the Big Ten season. We also had 15 assists on 25 made field goals yesterday, so we’re sharing the ball very well too.

There are still two of the best players in conference suiting up for the Boilers. How have E’Twaun Moore and JaJuan Johnson expanded their games? Is there room for them to be even better?

E’Twaun looks like the type of player that can score any time he wants to and has added a jumper in transition to his arsenal. As for JJ, he looks unstoppable in the low post. It will be interesting to see how he does against Mike Tisdale and Ralph Sampson III, the next two best centers in the league, but if Carroll and Marcus can effectively play the five JJ will be a matchup nightmare at the four.

It all comes down to defense for Purdue. Last year they had the 3rd best defense in the country but a more middle of the pack offense. Do you expect similar this year or will Purdue have a stronger offense?
From what I saw last night the offense could be stronger because of the loss of Robbie. Now everyone knows they need to pull their own weight. JJ and E’Twaun will draw a lot of attention, but it also means open looks for everyone else. Hart and Byrd took advantage of that yesterday for 12 points each. Lewis Jackson and Kelsey Barlow can run the show from a distribution standpoint, but both are capable scorers if needed. Right now, we have11 different players that can score in double figures on any given night. I love that versatility.

Give us a run down of the departures, second breakdown the incoming freshmen, which do you expect to make an instant impact?
Departures:
Chris Kramer – an inestimable loss on the defensive end. He was the will that carried this team after Hummel went down.
Keaton Grant – KG was finally healthy last year, but slightly disappointing. Still, he had key moments as a shooter and our Big Ten title belongs to him after he hit the game-winner at Minnesota.
Mark Wohlford – A senior walk-on and great practice player.

Incoming:
Anthony Johnson – Will redshirt this year.
Terone Johnson – Think of him as E’Twaun Moore 2.0. He came to Purdue already at Big Ten size as a very built 6’2″. He comes fromt he same high school as Eric Gordon and, like Moore, he led his team to a state championship as a senior. He was runner-up for Mr. Basketball in Indiana to OSU’s Deshaun Thomas.
Travis Carroll – a 6’10” true center that will be a run, rebound, defend guy as he improves. It may take a year for him to adjust to the college game, but I think he can contribute more than Bade did last year.
Sandi Marcius – He redshirted last year after breaking his foot before the season, otherwise he would have played a lot of minutes. He’s a 6’9″ 260 bruiser like we haven’t had in a long time.

Who do you expect to be the most improved player on Purdue’s roster this year and why?
Sophomore forward Patrick Bade rounded himself into shape and is now ready to be Hummel-lite. he can never totally replace Robbie, but he has the same body-type and a soft touch on his jumper. It is possible he could have a few games where we forget about Robbie.

Record prediction? Conference and overall. I think Purdue goes 27-4 and 14-4 in the Big Ten. If any other team had two All-American candidates, or if Robbie Hummel had never existed, people would not be dropping us so much.

Most feared player in the conference? JaJuan Johnson. I don’t see anyone that can match his skill set.

Projected most improved player in the conference? I think Ralph Sampson II can be a big difference maker for Minnesota.

Toughest place to play in the Big Ten? No one defends their homecourt like Wisconsin. That’s where our undefeated season died last year and it will be tough for anyone else to win there.

?Will Purdue win their Big Ten/ACC Challenge game [versus Virginia Tech]? Yes. It is Purdue’s toughest non-conference game, but Virginia Tech doesn’t have our talent and overall depth. I want to win it because then maybe these analysts will quiet down about our demise.