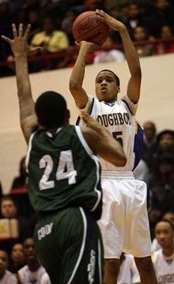 2012 Pershing guard recruit Sherron Dorsey-Walker was at Michigan’s 66-35 win against South Carolina Upstate this weekend, and I was able to catch up with him this afternoon for a quick recap and a brief update on his recruitment.

The visit was pretty basic. Dorsey-Walker watched the game and met with the coaches afterward, where they introduced him to the newest member of staff, CJ Lee. Dorsey-Walker had this to say about Lee:

He’s a great person. He was just telling me about how coach Beilein is and all the other coaches. He said they’re great people and that it would be a great place to play if I was there.

Dorsey-Walker was impressed with the game, and afterward he said the coaches talked to him about where he would fit into the offensive system.

They said I could either play the wing or play point guard, and it would just depend on what kind of team we were playing.

Dorsey-Walker has offers from Michigan, Baylor, Indiana, Dayton, Western Michigan, Central Michigan, Oakland and Fairview. Like when I talked to him last, he said he has no list and he has no timeframe for commitment. As for future visits, he won’t be visiting other schools any time soon but said he’ll probably be at a few more Michigan home games.

Pershing kicks off its basketball season on December 11th, and Dorsey-Walker said he’s been working on taking a leadership role on the team and working on his defense to prepare.