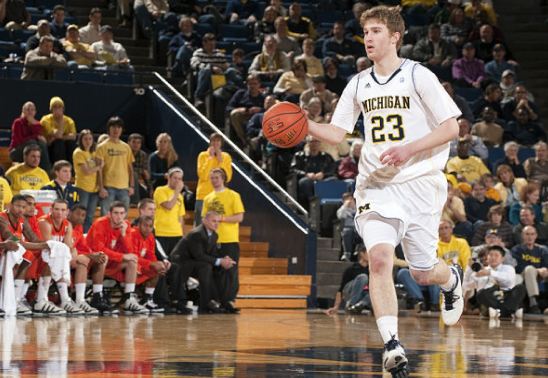 Watching this year’s Michigan is an entirely different experience than watching last year’s squad. First, I have no idea what to expect from the new faces on the court. Second, it’s free of the weight of expectations that seemed to doom last season. Bowling Green and USC Upstate clearly aren’t very good teams. They are both projected near the bottom of their respective leagues and haven’t played well in early season action. Despite their woes, it’s encouraging to see Michigan handle business and come away with a decisive victory.

It’s important not to jump to conclusions based on these early season results. In 2007-08, Michigan rolled over Radford and Brown before being served an extra large portion of humble pie with losses to Georgetown, Butler, and Western Kentucky. In 2008-09, they knocked off Michigan Tech and a decent Northeastern team before shocking UCLA in the Garden. In 2009-10 they beat Northern Michigan, Houston Baptist, and even Creighton before being blown out of the gym by Marquette and losing to Alabama. The bottom line is that you can’t take too much from an early season win over a team that appears to be in the bottom third of Division I basketball.

The game was relatively close for the first 17 minutes, with Tim Hardaway Jr. sidelined with a pair of fouls accumulated in the first 90 seconds of play, until one play changed the entire game. That play was Novak chasing down Luke Kraus and denying what looked to be an easy fast break layup. The layup would have given Bowling Green a lead but the block led to a wide open Vogrich three on the other end. Over the next 10 minutes (into the 2nd half) Michigan would go on a 22-5 run and never look back.

Offensively, you obviously have to love the way that Michigan shot the ball, especially from three point range. Michigan only topped tonight’s 47% three point shooting in two games last season (at Iowa and at Minnesota). The two point shooting, 45%, leaves a bit to be desired as there were at least three or four missed layups and dunks. The Wolverines attempted a healthy 31% of their field goals from three point range and an impressive 20 of 26 makes were assisted. Michigan was solid but unspectacular on the offensive glass, where Jordan Morgan led the charge with four offensive boards, but didn’t make it to the free throw line often. The cause for concern offensively is in the turnover department. The Wolverines turned the ball over on 20.8% of their possessions, a figure that isn’t terrible but is below the high standard that’s been set under John Beilein.

Defensively, Michigan was impressive again. The Wolverines held the Bowling Green to a meager 31.5% effective field goal percentage – just 20% in the second half. The Wolverines also did a tremendous job on the defensive glass, rebounding 79% of the Falcons missed shots (more impressive when you consider 3 of BG’s 9 offensive rebounds came on one possession). The main struggle on the defensive end was forcing turnovers. Michigan experimented with the 1-3-1 zone on a couple possessions but most ended up with an easy basket for Bowling Green.

Up next is a 2-1 Gardner-Webb team that holds wins over Charlotte, Mary Washington (?), and Virginia Intermont (?). After that the true test looms — Friday versus Syracuse in Atlantic City. Player bullets after the jump.