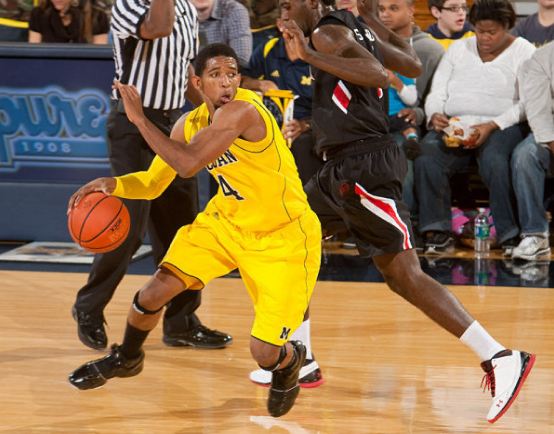 With another easy win over a lackluster opponent, Michigan continues to do all that one could ask of such a young team. USC Upstate, Bowling Green, and Gardner-Webb are all bad teams, but Michigan has handled them all with relative ease. As so many teams know all too well, anything can happen when you step on the floor. Syracuse eeked out a win over William & Mary this afternoon, despite being a 22 point favorite, and two years ago Michigan needed a miraculous comeback to defeat a terrible Savannah State team in overtime.

The story of today’s game was the continued strong play of Darius Morris and Jordan Morgan. The duo ran the pick and roll to perfection and carried Michigan’s offense early on. Morris finished with 21 points and 10 assists (to only 1 TO) while Morgan had 20 points and 8 rebounds. The pair, who happen to be roommates, combined to shoot 17 of 21, 81%, from the field. There was simply not much to complain about in regards to their nearly perfect performance.

Tim Hardaway Jr. and Stu Douglass weren’t half bad themselves. Hardaway added 15 points on 6 of 9 (2-3 3pt) shooting and 4 assists in 27 minutes while Douglass took the game over for a stretch in the second half, finishing with 10 points.

The four factors show what boils down to domination and they would have been even more lopsided if Michigan had not gone deep in their bench with 4 minutes to play, prompting a 10-3 Gardner-Webb run to close the game. Michigan shot the ball extremely well with an effective field goal percentage of 59%, 61% on two pointers, but even more impressive was Michigan’s rebounding. The Wolverines dominated the glass, rebounding 50% of their misses and 79% of Gardner-Webb’s missed attempts. It was a relatively free throw free game with just 18 FTAs total split relatively evenly between both squads. Michigan continued to struggle more than year’s past in the turnover department, coughing it up on 22% of their possessions.

On the 1-3-1 zone… Still not so good. The zone worked for a couple possessions but was also responsible for the majority of Gardner-Webb’s best looks from the field. Despite the negative early returns, I think you have to continue to try to develop the zone. Running it for 10 to 15 possessions in a game has the potential to be a game changer.

Michigan will use the holiday week to prepare for Friday’s game versus Syracuse in Atlantic City. The Orange have looked beatable early on, shooting the ball poorly and almost losing to William & Mary today. That being said, they will be an extremely tough test for this young Michigan team. They are bigger, longer, and more athletic than most teams that Michigan will face this season and are a tremendous rebounding team. As Beilein mentioned in his post game, he has never beaten Jim Boeheim in his career. Player bullets after the jump.