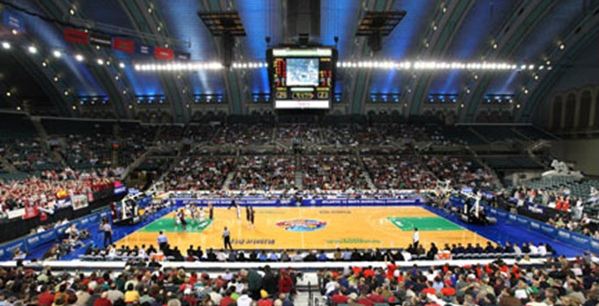 The Legends Classic follows the recent NCAA trend of automatically advancing a certain group of host schools to the final rounds. In this case that means that Syracuse, Michigan, UTEP, and Georgia Tech all receive free passes to Atlantic City. Albany, Bowling Green, Detroit, Gardner-Webb, Mercer, Niagara, Western Carolina, and William & Mary will get together in regional rounds and face off versus each other.

At first glance, the field looks intriguing. Syracuse, Michigan, and Georgia Tech are all big name programs and UTEP made an NCAA appearance and won the Conference USA last season. When you start to look a little closer, excitement begins to wane. All four squads lost at least one player to the NBA this summer. That includes Michigan’s Manny Harris, Syracuse’s Wes Johnson and Andy Rautins, UTEP’s Derrick Caracter, and Georgia Tech’s Derrick Favors and Gani Lawal. If any of those players were on their old teams, they might be the the preemptive favorite to win MVP of the tournament.

Of the schools involved, most haven’t quite started the new season on the right foot. Georgia Tech was already upset by Kennesaw State. Jim Boeheim is telling anyone that will listen that Syracuse is “not a good team right now” and they were almost upset by William and Mary. UTEP opened the season with a loss to Pacific. It’s fair to say all four teams involved have a number of question marks entering the weekend.

We preview every team involved in the Classic, which tips off Friday evening on HD Net, after the jump.

Rick Jackson, Brandon Triche, Kris Joseph, and Scoop Jardine all played major minutes last year for Syracuse but will be forced to take on significantly more offensive responsibility this season. Jackson is a monster down low, averaging 13 points and 13 rebounds through his first four games of the season. Jardine is the best setup man for the Orange, averaging 7 assists per game to go along with 13 points. Joseph was a double digit scorer last season but has struggled shooting the ball this year, connecting on just 31% of his attempts.

While their core group of returning players is strong, Syracuse has found themselves in preseason top 10 rankings yet again because of their loaded freshman class. Ranked the #2 class behind Ohio State, Syracuse’s incoming class includes Fab Melo, Dion Waiters, CJ Fair, and Baye Moussa Kieta.

Melo, at 7-foot tall and 244 pounds, is averaging just 15 minutes, 2 points, and two rebounds per contest. From the limited footage I’ve seen of Syracuse this season, Baye Moussa Kieta might be the most impressive Orange freshman. He is extremely long and athletic player that is active all over the court on defense and on the glass.

Despite their early struggles, Syracuse still has the most talent on paper. Syracuse has struggled offensively but they haven’t let that affect their defense, which is up to their established standards. If the shots start falling, the Orange could run away with this tournament.

Michigan is young and projected to be the worst team in the tournament. They’ve handled business early on, knocking off three subpar teams en route to a 3-0 record. Overlooking the fact that those 3 teams have combined to beat just one Division I team, Michigan has shown signs of life.

With a roster chalk full of players with little to no proven track record, it’s tough to judge which players on the Michigan roster can keep up their strong play. Darius Morris (15), Tim Hardaway Jr. (14), and Jordan Morgan (12) lead the Wolverines in scoring. Michigan has also gone deep into their bench, with 9 players averaging at least 10 minutes per game.

Michigan’s defense has perhaps been most surprising early-on, as the Wolverines have stifled their opponents, holding them to 30.5% shooting. The encouraging stat for Michigan fans is that the Wolverines are shooting 37.7% from three point range, those are shots that they are going to need if they want to upset Syracuse.

UTEP made the NCAA tournament last season but they are a new team this year. Former head coach Tony Barbee has moved on to Auburn and has been replaced by Tim Floyd. (Don’t ask me how he got a new coaching job, I have no answers for you.) Floyd loses the bulk of the Miners” interior presence in Derrick Caracter and Arnett Moultrie but still has a team picked near the top of the Conference USA.

UTEP might be one of the most experienced teams in the tournament as they have four seniors in their starting lineup. Not only are Stone and Culpepper seniors, their other double digit scorers, 6-foot-4 Christian Polk and 6-foot-7 Jeremy Williams, are seniors as well.

The loss to Pacific sounds bad, but the Tigers are predicted to win the Big West and UTEP shot just 18% from three in that contest. In the games they did win, there was one common denominator: free throw attempts. The Miners shot a total of 78 free throws in their last two games combined.

Georgia Tech was one of the best defensive teams in the country last season thanks to blocking shots at an astronomical rate and holding opponents to dreadful shooting averages inside the arc. The problem this season is that their two best shot blockers, Gani Lawal and Derrick Favors, are both in the NBA.

The Yellow Jackets still possess some talent. 6-foot-5 guard Iman Shumpert is a high volume shooter that has NBA athleticism but is not all together a very efficient offensive player. To his credit he does have an uncanny ability to pick up steals and grabs rebounds at an above average rate for a guard. Freshman center Daniel Miller anchors the interior, where he’s been a presence on the defensive end. Glen Rice Jr., Brian Oliver, and Mfon Udofia provide a trio of versatile and athletic wing guards that average between 10 and 12 points per game. Georgia Tech does almost all of their scoring inside the arc, as Oliver is their only decent (33%) perimeter shooting threat.

Last year’s Yellow Jacket squad turned the ball over more often than all but two high major schools. Early returns point to this team being a little better in that regard, but turnovers are still a concern. Alas, it was turnovers (and shooting) that doomed the Jackets in their upset loss to Kennesaw State, as they coughed it up on 26% of their possessions. To their credit, the Tech defense has done a tremendous job in forcing turnovers early on this season, accumulating steals at a higher rate than just about any other team in the country.

Syracuse is playing closest to home and has the most talented roster. Their underwhelming offensive performances early on should serve as a wake-up call and I suspect we will see a much improved team step on the floor. UTEP versus Georgia Tech will likely be a sloppy game abundant with turnovers but I think UTEP’s experience wins out in the end. The consolation game with Georgia Tech and Michigan could go either way, but I’m skeptical to pick the Wolverines to pick up a win on their first trip away from home.