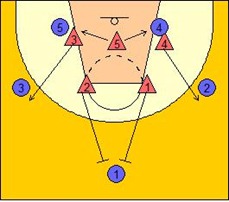 Jim Boeheim is widely renowned as the best zone coach in college basketball. He is one of the only coaches that utilizes a zone as his primary defense, rather than a change up, and he has been extremely successful. Michigan head coach John Beilein has not been immune to Boeheim’s zone, failing to knock off the Syracuse head man in 8 tries.

Here’s what Beilein had to say about Syracuse’s zone five years ago:

“I don’t know how to beat it,” West Virginia head coach John Beilein said. “I’m 0-7 against Coach Boeheim and I haven’t found a way to beat him. And it’s so consistent every year. … You can’t beat it.”

In honor of Beilein’s ninth attempt at a win over Syracuse, here’s a look at the principles of the 2-3 zone and some of the best ways to beat it.

Contrary to popular belief, Syracuse’s 2-3 zone is not a “passive defense” by any means. It’s not a defense that Jim Boeheim uses to mask his team’s weaknesses, rather it’s a defense he uses to utilize his team’s length and athleticism. It’s a defense that Syracuse has specifically targeted their recruiting toward and it can be devastating to face. There are a multitude of traps that Boeheim can run out of the zone but it is not generally known for forcing a lot of turnovers. Instead the zone holds the opposition to a low shooting percentage by forcing them into uncomfortable shots altered by the length and athleticism of its defenders.

There are a number of great articles that have been written about Boeheim’s zone. Fran Fraschilla wrote a pair of columns in 2003, one documenting how the zone works, the other about how to beat it. The X’s and O’s of Basketball has also posted a feature on the zone. Here’s another interesting piece from The Mikan Drill that discusses how William & Mary found success versus Syracuse last week. There’s also a nice ESPN Game Day video that’ we’ve embedded here:

One of the most stand traps in the 2-3 zone is in the corner. (Photos: Xs and Os)

Syracuse has been so effective with the zone because of their length and athleticism. This year’s starting line up is no different, measured 6-2, 6-4, 6-7, 6-9, and 7-0. Off the bench there’s more of the same with the rotation rounding out at 6-10, 6-4, 6-8, 6-8, and 6-6. This length and athleticism is fatal once Syracuse attempts to trap opposing ball carriers. Syracuse can trap almost anywhere on the floor but one of the most common areas is the corner. As you can see in the diagram above, defenders 1 and 4 trap the ball handler in the corner while 2, 3, and 5 deny the available passes. Essentially the only way to get out of the trap is to dribble through it.

Syracuse has the ability to trap all over the court, but these are two more common “trap zones.” In the first picture you can see the ball entering the “short corner” after ball reversal. The short corner is a weak spot of the 2-3 zone because the wing defender temporarily leaves it unguarded while bumping up to the wing. Syracuse counters this weakness by executing a trap here, leaving the ball handler in the short corner with little option but to dribble out of the trap. They also have the ability to “jump” the point guard, trapping him as he crosses the court and denying passes to the wings.

There are several keys to beating the 2-3 zone. First off, you need to make the zone work. It’s important to show great patience when facing the zone and consistently move the ball. The first “open” shot isn’t always the best shot, and it’s important to have great ball movement when facing the zone. Ball reversal is one of the easiest ways to beat the zone because you can move the ball faster than the defense can react. Passing the ball passively around the perimeter isn’t help, there needs to be aggressive intentions behind moving the ball.

It’s also extremely important to attack the gaps of the zone. By penetrating the gaps, you force multiple defenders in the zone to collapse, setting up advantages (4 on 3, 3 on 2) at other positions on the court.

As far as Michigan is concerned, they are undoubtedly going to shoot a good amount of threes. In Beilein’s six games versus Boeheim at Syracuse, his teams attempted 51% of their field goals from three point range. In those same six games, his teams have made 29% of those three point attempts. Like it or not, three point shooting will play a major role in this game.

In the high post, I can see Michigan trying to use guys like Tim Hardaway Jr. and Zack Novak. When you get the ball to the high post you have to do something with it and both of these guys should be sufficient options to shoot or find a teammate.

With such a young team, Beilein will undoubtedly try to keep things relatively simple. One thing I will be looking for is to see how well Darius Morris can penetrate the zone and create for others. It will also be worth noting how Michigan responds to Syracuse’s first punch, so to speak. Whether it’s the first drive to the hoop that is sent to the fifth row, or just a routine jumpshot that wouldn’t have been blocked in earlier games.