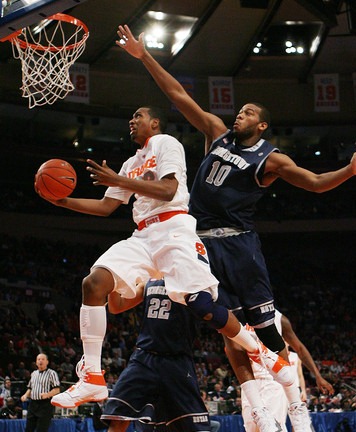 Michigan will hop on a plane this evening and head to Atlantic City for the Legends Classic. They draw the 10th ranked Syracuse Orange in the first round, slated for a 8pm Friday evening tip off. We’ve already discussed Syracuse’s 2-3 zone at length and it will certainly play a factor in today’s game. Syracuse, picked third in the Big East, has gotten off to a slow start but certainly has plenty of talent on both ends.

6-foot-9, 240 pound, senior Rick Jackson anchors the middle for the Orange. After starting for most of the last two seasons, Jackson has taken on an even more prominent role this season. He controls the glass, averaging 13 rebounds per game, and also has provided some offense, chipping in 13 points per contest. Michigan’s crop of inexperienced big men will be in for their first real challenge as they face off against Jackson.

Sophomore Brandon Triche and junior Scoop Jardine pull the strings in the Orange backcourt. Triche, 6-foot-4, started every game as a freshman last season and proved to be a dependable guard. Jardine, 6-foot-2, averages 13 points per game and provides an able three point threat, connecting on 35% of his 3-point attempts in early season play. Both Jardine and Triche have been inconsistent offensively early on, a quick look over early box scores shows a number of 0-7, 4-17, and 2-8 subpar shooting performances.

6-foot-7 junior wing forward Kris Joseph was expected to make a major jump for the Orange this season, even picked by several as a potential All-Big East performer. Joseph is not a threat from three point range, the career 22% three point shooter is already 2 of 14 this year, but he is long, athletic, and historically very efficient around the basket. Thus far he’s shooting just 31% from the field and, like several of Syracuse’s players offensively, hasn’t found his game offensive this season.

Despite oodles of returning talent, Syracuse’s season will hinge on their freshmen. The Orange hauled in the #2 recruiting class in the nation and expect results. Fab Melo, at 7-foot and 244 pounds, highlights the class but he has struggled with quicker centers averaging just 2 points and 2 rebounds in 15 minutes per game and picking up fouls at a quick rate. Perhaps the most impressive of Syracuse’s freshmen to date is Baye Moussa Keita, the 6-foot-10 forward has grabbed 7 rebounds per game in an average of 20 minutes. Freshmen Dion Waiters and CJ Fair both average 6 points per game while sophomores James Southerland and Mookie Jones round out the Orange rotation.

On paper, the talent gap between these two rosters is monumental. I tend to think that recruiting rankings are generally pointless once kids start playing in college but Syracuse has a remarkable six players that were rated in the RSCI top 100 compared to Michigan’s one player, freshman Evan Smotrycz.

The first key to the game for Michigan is naturally going to be hitting three point shots. The three point shot was the key to William & Mary’s near upset bid, as the Tribe shot 45% from three point range on 22 attempts. Michigan has been extremely successful scoring in the pain early on, but that success will be challenged by Syracuse’s impressive front line.

Beyond that, it will be interesting to see how Michigan reacts when they take their first hit on the chin. There is a long list of Michigan players that are playing good basketball right now. In a season that has been relatively smooth sailing, this will be their first taste of adversity.

Pomeroy predicts Syracuse by a score of 70-61, giving Syracuse an 84% chance at victory. I’ll go with Syracuse 75, Michigan 60. I suspect Michigan will play 10-15 minutes of good basketball where we will focus on and draw plenty of positives, but in the end field goal droughts and inconsistency will doom Michigan’s upset bid.

Happy Thanksgiving! Stay tuned over the weekend for our typical coverage as well as a number of features from David Merritt, who will be in Atlantic City.