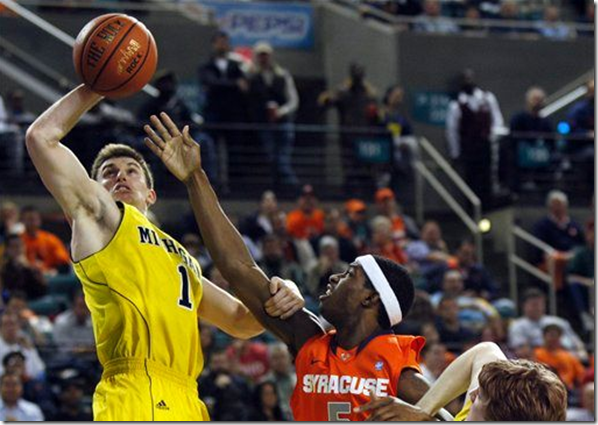 Some might call it ugly, others might call it a defensive struggle, but anyone that watched the game would admit that Michigan played a tough game. In the end, they didn’t have enough gas in the tank and learned the hard way how important it is the execute down the stretch. I would imagine that Michigan players and coaches are running down a list of possessions that they would have loved to have back as there were just too many mistakes down the stretch to earn a win.

There are certainly plenty of positives. Michigan, a team picked 10th in the Big Ten, battled a Syracuse team picked 10th in country to the final whistle in front of a crowd of predominantly Orange clad fans. Despite numerous second half Syracuse runs, Michigan continually fought their way back into the game. Despite a handful of freshmen, especially on the front line, Michigan outrebounded an extremely tall and athletic Syracuse team. I thought Michigan would lose by 15 and didn’t expect them to be in the game much into the second half, so it is safe to say that they showed me something.

But at the end of the day, hanging tough is just a moral victory. Michigan had chances to win this game and just didn’t come up with the plays they needed. One possession stands out to me — trailing by four points with 1:01 on the clock, Michigan might have played their worst offensive possession of the entire game. Morris dominated the ball and ended up driving the lane and firing up a wild shot. Perhaps Beilein should have called a time out here, but Michigan simply needed a better shot at that juncture in the game. Because this is such a young team, I’m confident that they will be able to build from this experience.

Looking at the stats, the first thing that stands out is that Michigan did a great job controlling the tempo. They wanted to slow the game down to prevent Syracuse from getting easy baskets in transition. The game ended up a 60 possession contest, which is about 10 possessions slower than Syracuse would like to play.

Offensively, the Wolverines obviously had difficulty with Syracuse’s 2-3 zone, scoring just .83 points per possession. There were some possessions that looked good. Early on Michigan did a great job of getting the ball into Morgan behind the zone and most of their first half three point makes resulted from penetration. But too many times the Wolverine offense stagnated and was marred by endless passing of the ball around the perimeter and seemingly desperate shots.

Defensively, Michigan did a tremendous job – holding the Orange to just .88 points per possession. The last time Syracuse’s offense was that inefficient was two seasons ago, February 11th, 2009, versus a UConn team that went to the Final Four. The difference in this game was that Michigan had no answer for Kris Joseph — the career 22% three point shooter hit 3 of 6 threes and finished the game with 22 points on 8 of 13 shooting. The Wolverines also did a good job on Syracuse’s starting guards, Scoop Jardine and Brandon Triche, who combined to shoot just 5 of 17 with 8 turnovers.

Michigan did an admirable job on the glass, allowing Syracuse to rebound just 27% of their missed shots. They won the turnover battle by a significant margin and weren’t outshot by much. However, the game changing difference was in the free throw column. Syracuse posted a free throw rate (FTA/FGA) of 31% (15 attempts) compared to Michigan’s 6.5% (4 attempts).

Next up is a UTEP team that lost a back-and-forth game to Georgia Tech tonight. It will be very interesting to see how this Michigan team reacts to the short turnaround after a tough loss. These early season tournament consolation games are monumentally important – look at last year’s collapse versus Alabama – and it’s important to regroup  because 1-1 is infinitely better than 0-2. We’ll have a full UTEP preview in the morning. Player bullets are after the jump.