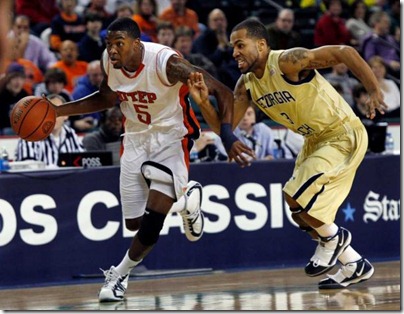 With little more than a night’s rest to recover from last night’s disappointing loss to Syracuse, Michigan is back in action today at Boardwalk Hall. The Wolverines will face a 3-2 UTEP team that has wins over Mercer, Western Carolina, and New Mexico St. with losses to Pacific and Georgia Tech.

Michigan will need a strong performance as a road Big Ten/ACC challenge match-up versus Clemson looms large on Tuesday. Finishing 1-1 in Atlantic City, rather than 0-2, and would give this team a much needed boost of confidence before their first true road game. Unfortunately for Michigan fans, it won’t be easy sledding as UTEP has some very talented pieces.

Randy Culpepper is the best scorer in the Miners’ lineup. He’s a career 35% three point shooter while firing up an average of 240 treys per season. He isn’t tall, 6-foot, but he can score inside the arc as well, where he shot 59% last year. He might be the best quick scoring guard that Michigan has faced this season.

6-foot-7 point guard Julyan Stone might be one of the most interesting players on the UTEP roster. He does a little bit of everything, averaging 10 points, 8 rebounds, 4 assists, 2 steals, and a block per game. Christian Polk, John Bohannon, and Jeremy Williams round out the Miner starting lineup. Polk, 6-foot-4 guard and fifth year senior, is averaging 14 points per game while shooting 43% from three point range. Williams, a 6-foot-7 senior, and Bohannon, a 6-foot-10 freshman, anchor the UTEP front line.

Defensively, under the guidance of Tim Floyd, don’t be surprised to see the Miners throw in some wrinkles. Floyd has never been afraid to experiment on that end and he busted out one of his favorites, the triangle and two, versus Georgia Tech last night. Despite some of the gimmicks that he’s employed, he has traditionally been a great defensive coach and this year’s Miner team should pose a formidable challenge on the defensive end. Michigan has probably practiced their zone-offense all week in practice, so it will be interesting to see how they react to returning to their base offense versus a good defense.

The Miners actually outshot Georgia Tech by a significant margin in their loss last night but they were badly outrebounded and turned the ball over too often. UTEP had been solid on the defensive glass in their earlier games, but this will be a good test to see if Michigan’s surprising rebounding proficiency can continue.The Miners have struggled to get anything going in the offensive rebounding department so Michigan should have a decent chance to control the glass defensively.

Pomeroy projects UTEP winning a close one, 64-63, giving Michigan a 46% chance at victory. I’ll stray from my original tournament preview prediction and take Michigan in a nailbiter, 66-62.